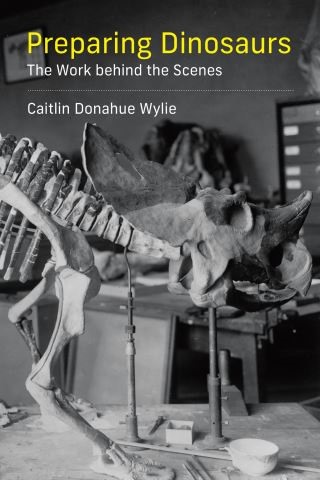 The Work behind the Scenes

An investigation of the work and workers in fossil preparation labs reveals the often unacknowledged creativity and problem-solving on which scientists rely.

Those awe-inspiring dinosaur skeletons on display in museums do not spring fully assembled from the earth. Technicians known as preparators have painstakingly removed the fossils from rock, repaired broken bones, and reconstructed missing pieces to create them. These specimens are foundational evidence for paleontologists, and yet the work and workers in fossil preparation labs go largely unacknowledged in publications and specimen records. In this book, Caitlin Wylie investigates the skilled labor of fossil preparators and argues for a new model of science that includes all research work and workers.

Drawing on ethnographic observations and interviews, Wylie shows that the everyday work of fossil preparation requires creativity, problem-solving, and craft. She finds that preparators privilege their own skills over technology and that scientists prefer to rely on these trusted technicians rather than new technologies. Wylie examines how fossil preparators decide what fossils, and therefore dinosaurs, look like; how labor relations between interdependent yet hierarchically unequal collaborators influence scientific practice; how some museums display preparators at work behind glass, as if they were another exhibit; and how these workers learn their skills without formal training or scientific credentials.

The work of preparing specimens is a crucial component of scientific research, although it leaves few written traces. Wylie argues that the paleontology research community's social structure demonstrates how other sciences might incorporate non-scientists into research work, empowering and educating both scientists and nonscientists.