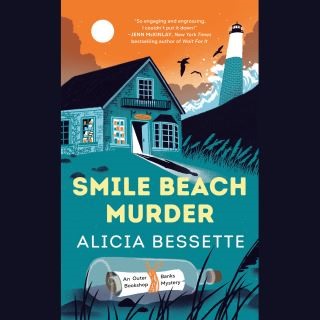 From author Alicia Bessette comes an all-new mystery series featuring Callie Padget, a former reporter turned bookshop clerk in the Outer Banks who is pulled into a deadly web of secrets when a mysterious fall at a lighthouse echoes a tragedy from her past.

When Callie is laid off from her reporting job, she returns to her hometown of Cattail Island and lands a gig at the local bookstore—the same one where she found comfort after her mother died.

In fact, the anniversary of her mother’s infamous death is approaching. Years ago, Teri Padget tumbled from the top of the lighthouse. As islanders are once again gossiping about the tragedy, devastating news strikes: the lighthouse has claimed another victim. Eva Meeks, of Meeks Hardware.

The police are calling it suicide, but Callie does not believe Eva jumped any more than she believes her mother did—especially because Callie knows that before her death, Eva had dug up a long-forgotten treasure hunt that could have put a target on Eva’s back.

In Callie’s search for answers, she enlists the help of some beloved books and several new friends, including the handsome local martial arts instructor, Toby Dodge. But when another death rocks Cattail Island, Callie must face her fears alone. As she earns enemies in pursuit of the truth, Callie knows she will either uncover the killer or become a victim herself.

Alicia Bessette: Before authoring the Outer Banks Bookshop mystery series, Alicia Bessette worked as a reporter in her home state of Massachusetts, where her writing won a first-place award from the New England Newspaper & Press Association. A pianist, published poet, and enthusiastic birdwatcher, she now loves living in coastal North Carolina with her husband, novelist Matthew Quick.