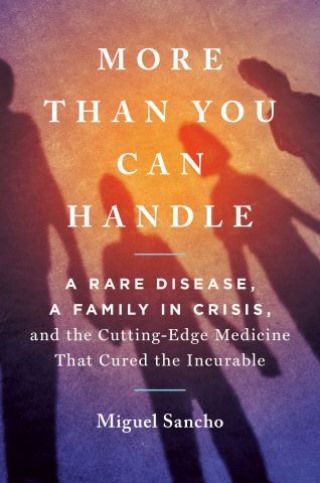 More Than You Can Handle

A Rare Disease, A Family in Crisis, and the Cutting-Edge Medicine That Cured the Incurable

The personally harrowing and medically enthralling story of a family's struggle to save a child from a deadly immune deficiency.

A journey through the deepest valleys and highest peaks of parenting. When a two-month-old baby falls ill, his apparently ordinary symptoms turn out to signal a rare and lethal immune deficiency. For parents Miguel Sancho and Felicia Morton, the discovery that their son, Sebastian, has chronic granulomatous disease (CGD) upends their lives and leaves the family with few options, all of them terrifying. With Sebastian at constant risk of deadly infection, they spend the next six years in some degree of self-quarantine, with all its attendant anxieties and stressors, as they struggle to keep their son alive, their marriage intact, and themselves sane.

The quest for a cure leads them into the alternate universe of the rare-disease community, and to the cutting edge of modern medicine, as their personal crises send them fumbling through various modalities of self-help, including faith, therapy, and meditation. With brutal honesty, Sancho describes how his struggles derail his career, put his marriage on life support, get his family evicted from a Ronald McDonald House, and ruin a Make-A-Wish trip.

Sancho's riveting tale of the diagnosis and treatment of his son's illness takes us deep inside the workings of the immune system, and into the radically innovative treatment used to repair it. Ultimately Sebastian is saved with a stem cell transplant using discarded umbilical cord blood, a groundbreaking technique pioneered and practiced by the medical wizards at Duke University Hospital.

Deeply researched and darkly humorous, this is a wrenching tale with a triumphant ending.

Miguel Sancho: Miguel Sancho is an Emmy Award-winning television producer currently show-running and developing series and specials for A&E. For seven years he helped run the ABC primetime news magazine 20/20. Prior to that, he was an investigative producer at 20/20 and CBS News's 48 Hours. He lives in New York with his wife, Felicia Morton, and their two children, Lydia and Sebastian.