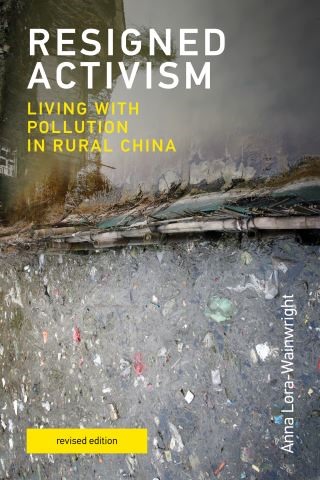 Living with Pollution in Rural China

An examination of the daily grind of living with pollution in rural China and of the varying forms of activism that develop in response.

Residents of rapidly industrializing rural areas in China live with pollution every day. Villagers drink obviously tainted water and breathe visibly dirty air, afflicted by a variety of ailments—from arthritis to nosebleeds—that they ascribe to the effects of industrial pollution. In Resigned Activism, Anna Lora-Wainwright explores the daily grind of living with pollution in rural China and the varying forms of activism that develop in response. This revised edition offers expanded acknowledgment of the contributions of Lora-Wainwright’s collaborators in China.

Lora-Wainwright finds that claims of health or environmental damage are politically sensitive, and that efforts to seek redress are frustrated by limited access to scientific evidence, growing socioeconomic inequalities, and complex local realities. Villagers, feeling powerless, often come to accept pollution as part of the environment; their activism is tempered by their resignation. Drawing on fieldwork done with teams of collaborators, Lora-Wainwright offers three case studies of “resigned activism” in rural China, examining the experiences of villagers who live with the effects of phosphorous mining and fertilizer production, lead and zinc mining, and electronic waste processing. The book also includes extended summaries of the in-depth research carried out by Ajiang Chen and his team in some of China’s “cancer villages,” village-sized clusters of high cancer incidence. These cases make clear the staggering human costs of development and the deeply uneven distribution of costs and benefits that underlie China’s economic power.