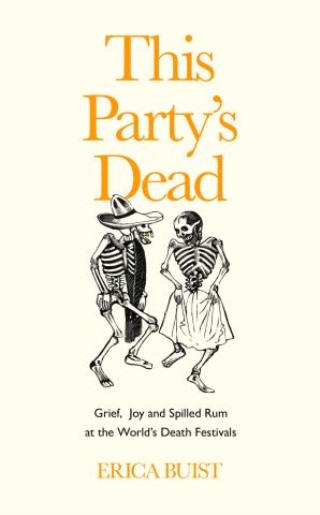 Grief, Joy and Spilled Rum at the World's Death Festivals

What if we responded to death... by throwing a party?

By the time Erica Buist’s father-in-law Chris was discovered, upstairs in his bed, his book resting on his chest, he had been dead for over a week. She searched for answers (the artery-clogging cheeses in his fridge?) and tried to reason with herself (does daughter-in-law even feature in the grief hierarchy?) and eventually landed on an inevitable, uncomfortable truth: everybody dies.

While her husband maintained a semblance of grace and poise, Erica found herself consumed by her grief, descending into a bout of pyjama-clad agoraphobia, stalking friends online to ascertain whether any of them had also dropped dead without warning, unable to extract herself from the spiral of death anxiety… until one day she decided to reclaim control.

With Mexico’s Day of the Dead festivities as a starting point, Erica decided to confront death head-on by visiting seven death festivals around the world – one for every day they didn’t find Chris. From Mexico to Nepal, Sicily, Thailand, Madagascar, Japan and finally Indonesia – with a stopover in New Orleans, where the dead outnumber the living ten to one – Erica searched for the answers to both fundamental and unexpected questions around death anxiety.

This Party’s Deadis the account of her journey to understand how other cultures deal with mortal terror, how they move past the knowledge that they’re going to die in order to live happily day-to-day, how they celebrate rather than shy away from the topic of death – and how when this openness and acceptance are passed down through the generations, death suddenly doesn’t seem so scary after all.

Erica Buist: Erica is a writer, journalist and author living in London. She writes mostly for the Guardian but can also be found on the BBC, Medium, Newsweek and in various literary magazines and anthologies. She has been awarded writing residencies at The Wellstone Center in the Redwoods, Vermont Studio Center, Faber, Arte Studio Ginestrelle and VCCA. Having finished her first book, a hybrid of memoir and journalism called This Party's Dead in which she travels to seven death festivals on four continents, Erica is now working on a collection of short stories based in London.