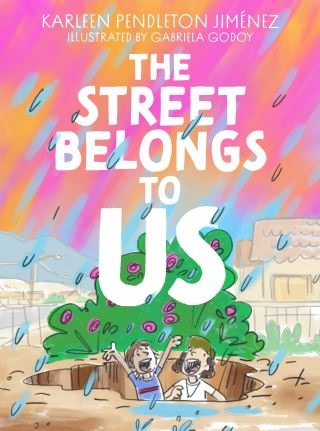 The Street Belongs to Us

In 1984 Los Angeles, Alex is a tomboy who would rather wear her hair short and her older brother’s hand-me-downs, and Wolf is a troubled kid who’s been wearing the same soldier’s uniform ever since his mom died. They temporarily set their worries aside when their street is torn up by digging machines and transformed into a muddy wonderland with endless possibilities. To pass the hot summer days, the two best friends seize the opportunity to turn Muscatel Avenue into a battleground and launch a gleeful street war against the rival neighborhood kids.

But when Alex and Wolf make their headquarters inside a deep trench, Alex’s grandmother warns them that some buried things want to be found and some want to stay hidden and forgotten. Although she has the wisdom of someone who has survived the Mexican Revolution, the Spanish Flu, and immigration to a new country, the kids ignore her warning, unearthing more than they bargained for.

This exuberant novel perfectly capture the summers of youth, when anything feels possible and an adventure is always around the corner. Bursting with life and feeling, both the people and the land come alive in a tale interwoven with Mexican-American identity, experience, and history. The Street Belongs to Us is a story of family, friendship, and unconditional acceptance, even when it breaks your heart.

Karleen Pendleton Jiménez is a writer and filmmaker who teaches education, gender, and social justice at Trent University. She is the author of Lambda Literary Award finalists Are You a Boy or a Girl? and How to Get a Girl Pregnant, Tomboys and Other Gender Heroes, and numerous short stories and essays. She wrote the award-winning animated film Tomboy, and has been recognized by the American Library Association and the Vice Versa Awards for Excellence in the Gay and Lesbian Press. Raised in Los Angeles, she lives in Toronto with her partner and daughter.