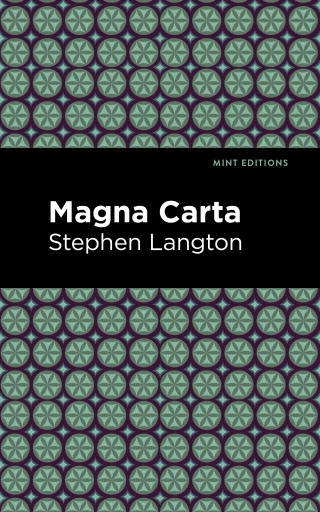 Magna Carta (1215) is a peace treaty drafted by Archbishop of Canterbury Stephen Langton in coordination with the English barons. Intended as an appeal to King John of England on behalf of the barons, Magna Carta was agreed to on June 15, 1215. Although it was not initially respected, leading to the First Barons’ War, Magna Carta was later revised and reissued as part of the Treaty of Lambeth in 1217, establishing peace between King Henry III and the rebel barons.

Dissatisfied with the rule of King John, rebel barons gathered in Northampton in May of 1215 to renounce their feudal ties to the crown. Unwilling to accept arbitration with the Pope on behalf of the King, the barons forced John to meet with them at Runnymede on June 10, 1215. Over the next ten days, and under the direction of Stephen Langton, they turned their demands into a charter now known as Magna Carta. Agreed to by King John on June 15, the Magna Carta proposed major political reforms, including the protection of the rights of the church, protection from unjust imprisonment, and limits on feudal payments and other forms of taxation due to the King. Although Magna Carta focuses on the rights of barons, it also articulates the rights of serfs and other free men. Recognized as a foundational document on the concept of liberty, Magna Carta is widely respected in Britain and the United States, and served as a major influence on the creation of the United States Constitution.

With a beautifully designed cover and professionally typeset manuscript, this edition of Magna Carta is a classic of English political history reimagined for modern readers.

Stephen Langton (1150-1228) was an English Cardinal of the Roman Catholic Church who served as Archbishop of Canterbury from 1207-1228. A leader in the struggle against King John, Langton, on behalf of the barons, drafted the Magna Carta as an appeal to the king to respect the liberties granted by Henry I. Agreed to by King John in 1215, the Magna Carta protected the rights of the church, guarded the barons from unjust imprisonment, and limited feudal payments to the King. Although the document was redrafted and adjusted by others over time, Langton’s role in representing the rights of royal subjects is seen today as a crucial defense of liberty that continues to influence legal scholarship and political representation worldwide.