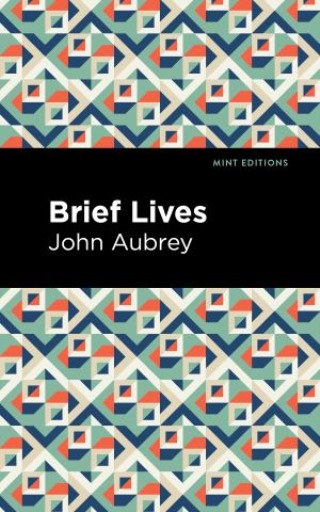 Brief Lives (1669-1697) is a collection of short biographical sketches on famous British figures by author, antiquarian, and archaeologist John Aubrey. The work is significant for its unique style, a blend of facts—names, dates, family, important works—and personal anecdotes for which Aubrey combined his skills for research and conversation to compile. Unpublished during his lifetime, the text was pieced together from extensive handwritten manuscripts by numerous editors and scholars, and over the centuries has become a beloved cultural artifact of early-modern Britain. A fascinating figure and gifted researcher in his own right, John Aubrey sought to capture the significance of his era and the people whose contributions to art, politics, science, and philosophy were not only changing Britain, but the world, forever. As a historical record, his Brief Lives provides valuable information on such figures as poet John Milton, playwright William Shakespeare, philosopher Thomas Hobbes, and chemist Robert Boyle. But as a work of art, the text humanizes them, reminding its readers that these were people whose desires, imperfections, and day-to-day lives were not unlike our own. We turn to his works to discover that Sir Walter Raleigh was a “poor” scholar “immerst…in fabrication of his owne fortunes,” or to read that Shakespeare, the son of a butcher who worked for his father as a youth, was known to “make a speech” while slaughtering a calf. At times straightforwardly factual, at others filled with gossip, Brief Lives is a document of its time that attempts to record a living history of knowledge and influence. Whether it succeeds is beside the point—that it speaks to us centuries on is the heart of the matter, the reason it must be read. A well-known man in his lifetime, Aubrey moved between cultural and political circles with ease, compiling the sources that would later become Brief Lives. Although a tireless writer and scholar, he published little during his life. His work, including Brief Lives, is thus the product of centuries of diligent research and editing from numerous scholars who understood, as the reader of this volume surely will, that Aubrey’s work deserved to reach the public. With a beautifully designed cover and professionally typeset manuscript, this edition of John Aubrey’s Brief Lives is a classic of British literature and biography reimagined for modern readers.

John Aubrey (1626-1697) was a British writer, antiquarian, and archaeologist. He lived and worked toward the end of the Scientific Revolution, a time when the process, methods, and standards of modern science first began to be developed. Remembered today for his curious spirit, attention to detail, and passion for inquiry, Aubrey was a renowned researcher in his day, discovering and recording numerous megalithic monuments, Roman ruins, and burial sites, as well as tracing the history of British place names. He was also a dedicated folklorist, studying the traditions, customs, and religions of the British people. Brief Lives, his most famous work, is a collection of short biographical studies of hundreds of British poets, politicians, playwrights, scientists, and other intellectual or public figures.