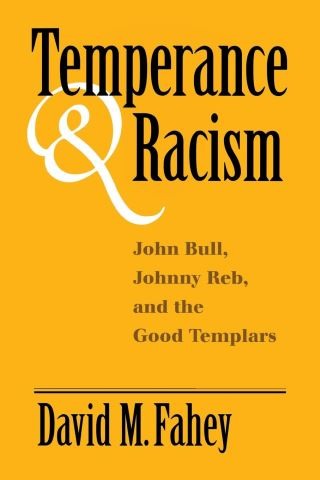 One hundred twenty years ago, the Independent Order of Good Templars was the world's largest, most militant, and most evangelical organization hostile to alcoholic drink. Standing in the forefront of the international temperance movement, it was recognized worldwide as a potent social and moral force.

Temperance and Racism restores the Templars, now an almost forgotten footnote in American and British social history, to a position of prominence within the temperance movement. The group's ideology of universal membership made it unique among fraternal organizations in the late nineteenth century and led to pioneering efforts on behalf of equal rights for women.

Its policy toward African Americans was more ambiguous. Though a great many white Templars, especially those in Great Britain, rejected the extreme racism prevalent in the late nineteenth century, members in the American South did not. The decision to allow state lodges to rule on their membership eligibility led to the great schism of 1876-87. The break was mended only after British leaders compromised their ideals of universal brotherhood and sisterhood for the sake of the organization's international unity. Drawing on previously unused primary sources, David Fahey reveals much about racial attitudes and behavior in the late nineteenth century on both sides of the Mason-Dixon line, and on both sides of the Atlantic.

David M. Fahey: David M. Fahey, professor of history at Miami University (Ohio), is former president of the Alcohol and Temperance History Group. He is editor of The Black Lodge in White America.