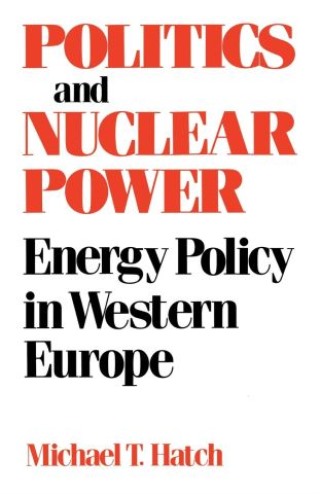 With the dramatic changes OPEC precipitated in the structure of world energy markets during the 1970s, energy became a central concern to policymakers throughout the industrialized West. This book ex-amines the responses of public officials in three leading European nations—the Federal Republic of Germany, France, and the Netherlands—to the energy crisis. As the study shows, the proposed energy programs in the three countries shared remarkable similarities; yet the policy outcomes were very different. To explain why, Michael T. Hatch goes beyond the specific content of government energy policy to include an analysis of the policymaking process itself.

At the heart of the study is an exploration of the various dimensions of nuclear policy in West Germany. The political consensus on nuclear power that prevailed in the initial years following the energy crisis disintegrated as antinuclear "citizens' initiatives," the courts, and trade unions, as well as the traditional political parties, entered the policymaking process. Subsequent government efforts to resolve the political stalemate over nuclear power foundered in a morass of domestic electoral politics and an international debate over nuclear proliferation.

Extending the analysis to comparisons with French and Dutch nuclear strategies, Hatch argues that the critical factor in determining nuclear policy was the manner in which the political system structured the nuclear debate. In contrast to West Germany, where the electoral and parliamentary systems enhanced the influence of the antinuclear "Greens," the electoral system and constellation of political parties in France served to dissipate the influence of the antinuclear forces. Thus in France the nuclear program en-countered few impediments. In the Netherlands, as in West Germany, government policy was paralyzed in the face of antinuclear sentiment across a broad spectrum of Dutch society.

Hatch has provided here not only a useful examination of the development of energy policy in western Europe but also a case study of the close interplay between policy and politics.