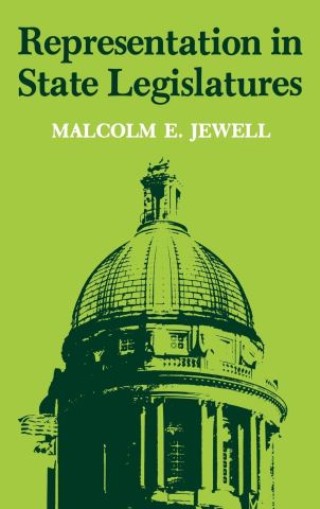 Every two years American voters turn out to elect several thousand representatives to state legislatures. Only now in Representation in State Legislatures do we have a detailed examination of how these officials perceive their jobs and how they attempt to do them. To provide answers to these questions, Malcolm E. Jewell conducted intensive interviews with 220 members of houses of representatives in nine selected states. He asked each legislator how he kept in touch with his constituents, how he resolved matters of policy, how he sought government resources for his district, and what services he provided for individual constituents.

State legislatures differ greatly, and they are not institutionalized to the same degree as the national congress. It is difficult, therefore, to generalize on such effects as partisanship. Likewise it appears that past explanatory models do not adequately describe the complex relationships seen by most legislators in their work. The state legislature is changing. It is becoming more institutionalized. It is becoming more stable as fewer members retire and more are reelected. The trend is toward longer sessions, increased staff, and more activity. With this trend the legislator is becoming more visible; he can deal with lawmaking while having greater opportunities to provide services and to gain publicity for them.

As the move, begun by the Reagan administration, to put more responsibility for programs on the states continues, the state legislatures will assume a place of greater importance in the governing of the United States. This pioneering study of representation will thereby gain significance both for the understanding it imparts and for the new questions it raises.

Malcolm E. Jewell: Malcolm E. Jewell, professor emeritus at the University of Kentucky, is the coauthor of The Kentucky Legislature: Two Decades of Change and State Politics, Parties, and Policy.