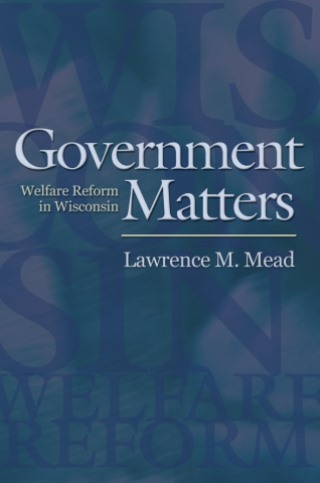 "Good government" is commonly seen either as a formidable challenge, a distant dream, or an oxymoron, and yet it is the reason why Wisconsin led America toward welfare reform. In this book, Lawrence Mead shows in depth what the Badger State did and--just as important--how it was done. Wisconsin's welfare reform was the most radical in the country, and it began far earlier than that in most other states. It was the achievement of legislators and administrators who were unusually high-minded and effective by national standards. Their decade-long struggle to overhaul welfare is a gripping story that inspires hope for better solutions to poverty nationwide.


Mead shows that Wisconsin succeeded--not just because it did the right things, but because its government was unusually masterful. Politicians collaborated across partisan lines, and administrators showed initiative and creativity in revamping welfare. Although Wisconsin erred at some points, it achieved promising policies, which then had good outcomes in terms of higher employment and reduced dependency. Mead also shows that these lessons hold nationally. It is states with strong good-government traditions, such as Wisconsin, that typically have implemented welfare reform best. Thus, solutions to poverty must finally look past policies and programs to the capacities of government itself. Although governmental quality is uneven across the states, it is also improving, and that bodes well for better antipoverty policies in the future.

Lawrence M. Mead: Lawrence M. Mead is Professor of Politics at New York University. His books, including Beyond Entitlement (Free Press), The New Politics of Poverty (Basic Books), and The New Paternalism, have helped shape welfare reform both in this country and abroad.