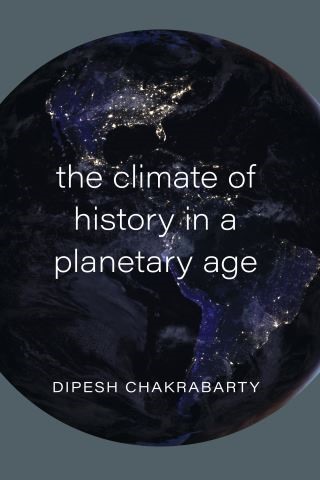 The Climate of History in a Planetary Age

For the past decade, historian Dipesh Chakrabarty has been one of the most influential scholars addressing the meaning of climate change. Climate change, he argues, upends long-standing ideas of history, modernity, and globalization. The burden of The Climate of History in a Planetary Age is to grapple with what this means and to confront humanities scholars with ideas they have been reluctant to reconsider—from the changed nature of human agency to a new acceptance of universals.

Chakrabarty argues that we must see ourselves from two perspectives at once: the planetary and the global. This distinction is central to Chakrabarty’s work—the globe is a human-centric construction, while a planetary perspective intentionally decenters the human. Featuring wide-ranging excursions into historical and philosophical literatures, The Climate of History in a Planetary Age boldly considers how to frame the human condition in troubled times. As we open ourselves to the implications of the Anthropocene, few writers are as likely as Chakrabarty to shape our understanding of the best way forward.

Dipesh Chakrabarty: Dipesh Chakrabarty is the Lawrence A. Kimpton Distinguished Service Professor of History, South Asian Languages and Civilizations at the University of Chicago. He is the author of The Calling of History: Sir Jadunath Sarkar and His Empire of Truth, also published by the University of Chicago Press. He is the recipient of the 2014 Toynbee Prize, which is given to a distinguished practitioner of global history.