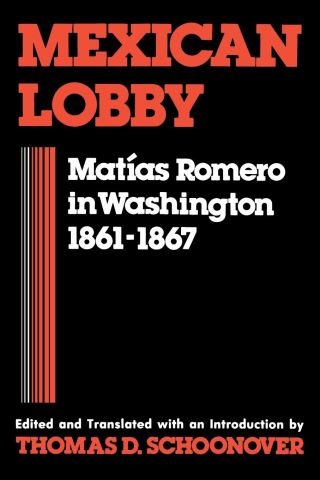 For Americans the Civil War was simply an internal conflict, and they have emphasized its military exploits and the romantic myths that have grown up around it. They have given little regard to its international aspects. In truth, however, the American Civil War attracted worldwide attention. Other nations followed the fortunes of the war and sought to understand its goals because they saw that the fate of the American system would likely have a profound effect on their own social and political economies. One such nation was the United States' southern neighbor Mexico, and in Mexican Lobby Thomas Schoonover reveals the efforts of Matias Romero, Mexico's representative in Washington, to influence American leaders in his country's favor.

Romero, appointed in 1859, served the liberal government of Benito Juarez, which had just emerged from its own civil War of Reform and now had to contend with a French invasion under Maximilian. He proved an indefatigable worker, who sent his government voluminous reports on the American situation and on his meetings with American leaders. Translated and published here for the first time is a representative selection of memoranda of his conversations with Washington officials and politicians.

Romero attempted to forge stronger trade ties with the United States, establish better sea and rail links, and, above all, encourage military intervention to oust the French. In seeking these ends Romero was not above meddling in domestic politics. The memoranda show him supporting efforts to secure the resignation of Secretary of State Seward and cooperating with radical moves to defeat Lincoln's election in 1864 and, later, to impeach Andrew Johnson.

Copies of Romero's official correspondence are rare in the United States and in Mexico and have never been translated. Mexican Lobby makes readily available a body of material that will be valuable to historians of the Civil War, Latin America, and American diplomacy.