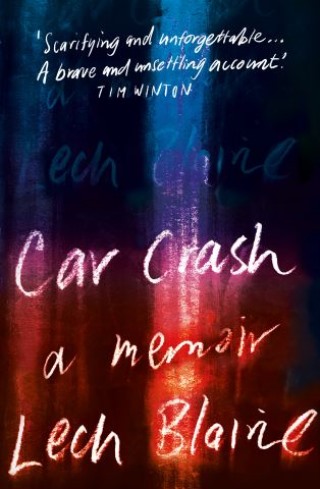 At seventeen, Lech Blaine walked away unharmed from a car crash that killed three of his friends and left two in comas.

On a May night in 2009, seven boys in Toowoomba, Queensland, piled into a car. They never arrived at their destination. The driver made a routine error, leading to a head-on collision.

In the aftermath, rumours about speed and drink driving erupted. There was intense scrutiny from media and police. Lech used alcohol to numb his grief and social media to show stoicism, while secretly spiralling towards depression and disgrace.

This is a riveting account of family, friendship, grief and love after tragedy. In a country where class and sport dominate, and car crashes compete with floods and pandemics for headlines, our connection with others is what propels us on. Heartbreaking and darkly hilarious, Car Crash is a story for our times.

‘Scarifying and unforgettable, Car Crash is a story of carnage and life-long consequences – not just from a single, sudden catastrophe but from the long, slow cataclysm of masculine confusion. A brave and unsettling account.’ —Tim Winton

‘A heart-soaring act of literary bravery where the ongoing cost of experience is exposed in every note-perfect sentence. This is a profound reflection on the deafening soul noise heard by a beautiful group of young friends fated to live the rest of their lives with the silence of the dead. Some books just have to be written. And some books just have to be read.’ —Trent Dalton

‘I began this book with my guts in my mouth. Then, as I read on, I winced with recognition, I laughed a lot and my heart gradually broke open. It's odd to talk about “talent” when a book covers such sensitive, sad subject matter, but the truth is that Blaine has it. There are strong sentences, clarity of intent and tone, wicked one-liners and a mastery of metaphor. This book is for everyone – it truly captures something of "modern Australia" in a tenderly told story of one young man's tumultuous coming-of-age.’ —Bri Lee

‘Car Crash is a clear-eyed, bruising and tender account of how the moments that thrust you into adulthood can take place in seconds. Lech Blaine’s journalism has long made me suspect he’s one of the best writers of his generation. Car Crash confirms it, without a doubt.’ —Ben Law

Lech Blaine: Lech Blaine is a writer from Toowoomba, Queensland. His work appears in The Best Australian Essays, Meanjin, The Guardian and The Monthly, among others. His work has been nominated for several prizes and he was an inaugural recipient of a Griffith Review Queensland Writers Fellowship.