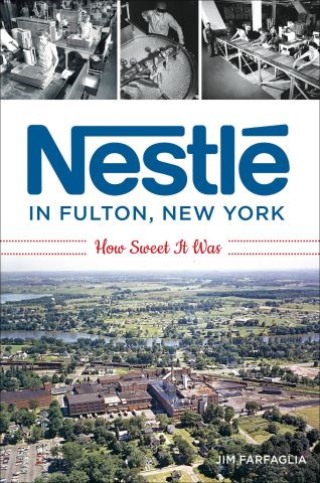 How Sweet It Was

Devour this delectable, surprising history of one of America’s most beloved confectioners with photos, firsthand accounts, and stories.

In 1898, Switzerland’s Nestlé Company was searching for a location to build its first milk processing plant in the United States. Upstate New York’s bountiful dairy farms sealed the deal for a factory in Fulton. Soon another Swiss company requested space at the factory to produce a confection that had taken Europe by storm: the milk chocolate bar. Over the next century, factory technicians invented classic treats including the Nestlé Crunch Bar, Toll House Morsels, and Nestlé Quik.

With 1,500 workers churning out a million pounds of candy per day, Fulton became known as the city that smelled like chocolate. In this lively, photo-filled biography, Jim Farfaglia recounts the delectable history of Nestlé in Fulton, New York.

Jim Farfaglia: Jim Farfaglia lives in and writes about the history and culture of Upstate New York. In 2011, after a fulfilling career directing a children’s camp and advocating for youth, Farfaglia transitioned to focusing on his lifelong interest in writing. Splitting his time between poetry and what he calls “story-driven nonfiction,” Jim also enjoys helping others fulfill their dream of writing a book. Visit his website at www.jimfarfaglia.com.