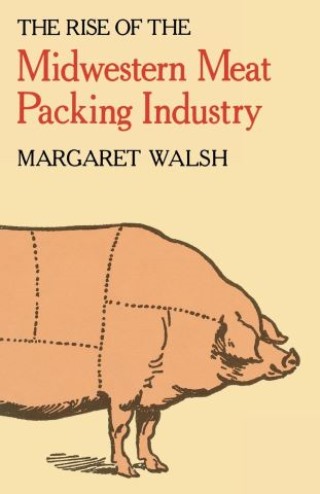 The Rise of the Midwestern Meat Packing Industry

The history of the meat packing industry of the Midwest offers an excellent illustration of the growth and development of the economy of that major industrial region. In the course of one generation, meat packing matured from a small-scale, part-time activity to a specialized manufacturing operation. Margaret Walsh's pioneering study traces the course of that development, shedding light on an unexamined aspect of America's economic history.

As the Midwest emerged from the frontier period during the 1840s and 1850s, the growing urban demand for meat products led to the development of a seasonal industry conducted by general merchants during the winter months. In this early stage the activity was widely dispersed but centered mainly along rivers, which provided ready transportation to markets.

The growth of the railroads in the 1850s, coupled with the westward expansion of population, created sharp changes in the shape and structure of the industry. The distinct advantages of good rail connections led to the concentration of the industry primarily in Chicago, but also in St. Louis and Milwaukee. The closing of the Mississippi River during the Civil War insured the final dominance of rail transport and spelled the relative decline of such formerly important packing points as Cincinnati and Louisville.

By the 1870s large and efficient centralized stockyards were being developed in the major centers, and improved technology, particularly ice-packing, favored those who had the capital resources to invest in expansion and modernization. By 1880, the use of the refrigerated car made way for the chilled beef trade, and the foundations of the giant meat packing industry of today had been firmly established.

Margaret Walsh has located an impressive array of primary materials to document the rise of this important early industry, the predecessor and in many ways the precursor of the great industrial complex that still dominates today's midwestern economy.

Margaret Walsh: Margaret Walsh is lecturer in economic history at the University of Birmingham in England and is the author of The American Frontier Revisited