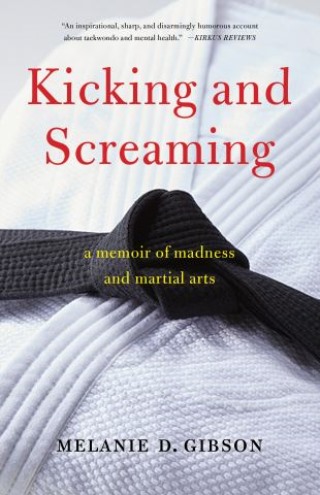 A Memoir of Madness and Martial Arts

Melanie Gibson was an independent woman with a good job, multiple college degrees, and a condo in the trendy part of town. She also had a few mental illnesses, a minor substance abuse problem, and rotten relationship skills. She was a high-functioning crazy who needed a good kick in the pants, literally and metaphorically.
In early 2013, as a last desperate means to save her sanity, Melanie turned to a nearly forgotten childhood activity: the Korean martial art of taekwondo. As if the universe were listening, she discovered her West Texas childhood taekwondo instructors’ Grandmaster operated a taekwondo school a few miles from her home in Fort Worth, Texas—and she decided to start her training over as a white belt.
In taekwondo, Melanie felt like she had a fresh start in more ways than one. She found an inner peace she’d never known before, a sense of community, a newfound confidence, and a positive outlook on life. The kicking and screaming she was doing in class quieted the long-term kicking and screaming in her mind. Funny and frank, Kicking and Screaming: A Memoir of Madness and Marital Arts is the story of Melanie’s life-changing journey from troubled, lost soul to confident taekwondo black belt.

Melanie D. Gibson: Melanie Gibson was raised in Snyder, Texas, where she began taekwondo training at age ten. She has a bachelor’s degree in English from Texas Woman’s University, a Master of Library Science from the University of North Texas, and an MBA from the University of Texas at Arlington. She has worked in the healthcare industry since 2004, with roles as a hospital librarian, corporate trainer, and learning designer. Melanie continues to pursue advanced taekwondo black belt degrees, writes about taekwondo on her blog Little Black Belt, and is a competitive board breaker. She lives in Fort Worth, Texas.