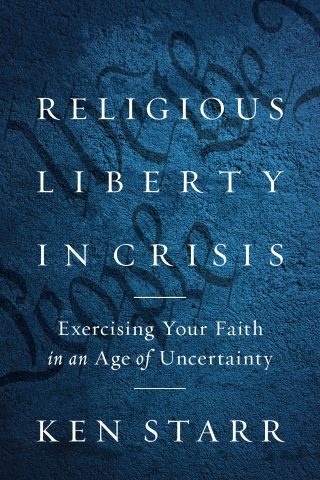 Exercising Your Faith in an Age of Uncertainty

What was unfathomable in the first two decades of the twenty-first century has become a reality. Religious liberty, both in the United States and across the world, is in crisis.

As we navigate the coming decades, We the People must know our rights more than ever, particularly as it relates to the freedom to exercise our religion. Armed with a proper understanding of this country’s rich tradition of religious liberty, we can protect faith through any crisis that comes our way. Without that understanding, though, we’ll watch as the creeping secular age erodes our freedom.

In this book, Ken Starr explores the crises that threaten religious liberty in America. He also examines the ways well-meaning government action sometimes undermines the religious liberty of the people, and how the Supreme Court in the past has ultimately provided us protection from such forms of government overreach. He also explores the possibilities of future overreach by government officials. The reader will learn how each of us can resist the quarantining of our faith within the confines of the law, and why that resistance is important. Through gaining a deep understanding of the Constitutional importance of religious expression, Starr invites the reader to be a part of protecting those rights of religious freedom and taking a more active role in advancing the cause of liberty.

Ken Starr has had a distinguished career in academia, the law and public service. Starr writes articles and books of interest and serves as a commentator for Fox and various news programs. Starr has argued 36 cases before the U.S. Supreme Court, including during his service as U.S. Solicitor General. Starr earned his B.A. from George Washington University, an M.A. from Brown University, and his J.D. from Duke University Law School. Starr is author of First Among Equals: The Supreme Court in American Life; Bear Country: The Baylor Story; and his most recent book, Contempt: A Memoir of the Clinton Investigation (a New York Times best seller in 2018). Starr has received numerous honors and awards, including the Edmund Randolph Award for Outstanding Service in the Department of Justice and three honorary doctorates. He and his wife Alice have been married since 1970 and live in Waco, Texas. They are blessed with three children and eight grandchildren.