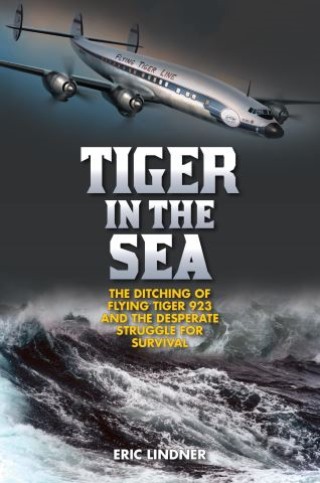 Tiger in the Sea

September 1962: On a moonless night over the raging Atlantic Ocean, a thousand miles from land, the engines of Flying Tiger flight 923 to Germany burst into flames, one by one.

Pilot John Murray didn’t have long before the plane crashed headlong into the 20-foot waves at 120 mph.

As the four flight attendants donned life vests, collected sharp objects, and explained how to brace for the ferocious impact, 68 passengers clung to their seats: elementary schoolchildren from Hawaii, a teenage newlywed from Germany, a disabled Normandy vet from Cape Cod, an

immigrant from Mexico, and 30 recent graduates of the 82nd Airborne’s Jump School. They all expected to die.

Murray radioed out “Mayday” as he attempted to fly down through gale-force winds into the rough water, hoping the plane didn’t break apart when it hit the sea.

Only a handful of ships could pick up the distress call so far from land. The closest was a Swiss freighter 13 hours away. Dozens of other ships and planes from nine countries abruptly changed course or scrambled from Canada, Iceland, Ireland, Scotland, and Cornwall, all racing to the rescue—but they would take hours, or days, to arrive.

From the cockpit, the blackness of the Atlantic grew ever closer. Could Murray do what no pilot had ever done—“land” a commercial airliner at night in a violent sea without everyone dying? And if he did, would rescuers find any survivors before they drowned or died from hypothermia in the icy water?

The fate of Flying Tiger 923 riveted the world. Bulletins interrupted radio and TV programs. Headlines shouted off newspapers from London to LA. Frantic family members overwhelmed telephone switchboards. President Kennedy took a break from the brewing crises in Cuba and Mississippi to ask for hourly updates.

Tiger in the Sea is a gripping tale of triumph, tragedy, unparalleled airmanship, and incredibly brave people from all walks of life. The author has pieced together the story—long hidden because of murky Cold War politics—through exhaustive research and reconstructed a true and inspiring tribute to the virtues of outside-the-box-thinking, teamwork, and hope.

In 2009, Eric Lindner became a hospice volunteer, helping patients cope with the reality of dying. His book Hospice Voices: Lessons for Living at the End of Life was critically acclaimed by leading doctors and caregivers, NPR, BBC, Washington Independent Review of Books, Publishers Weekly, and Booklist’s Rebecca Vnuk, who named it one of 2013’s five best memoirs. Since 2015 the attorney, businessman, and DC native has been teaching Ethics in Action, a course that dissects the NASA Challenger disaster, at Georgetown University. He’s married to Captain Murray’s daughter; they live in Pismo Beach, California.