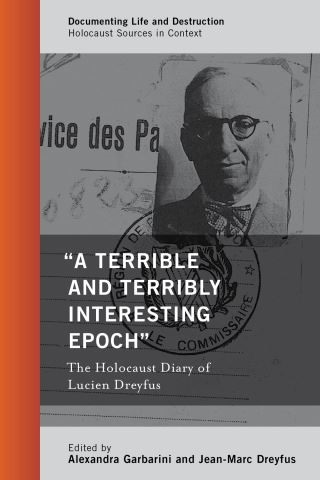 "A Terrible and Terribly Interesting Epoch"

The Holocaust Diary of Lucien Dreyfus

This extraordinary wartime diary provides a rare glimpse into the daily life of French and foreign-born Jewish refugees under the Vichy regime during World War II. Long hidden, the diary was written by Lucien Dreyfus, a native of Alsacewho was a teacher at the most prestigious high school in Strasbourg, an editor of the leading Jewish newspaper of Alsace and Lorraine, the devoted father of an only daughter, and the doting grandfather of an only granddaughter. In 1939, after the French declaration of war on Hitler's Germany, Lucien and his wife, Marthe, were forced by the French state to leave Strasbourg along with thousands of other Jewish and non-Jewish residents of the city. The couple found refuge in Nice, on the Mediterranean coast in the south of France. Anti-Jewish laws prevented Lucien from resuming his teaching career and his work as a newspaper editor. But he continued to write, recording his trenchant reflections on the situation of France and French Jews under the Vichy regime. American visas allowed his daughter, son-in-law, and granddaughter to escape France in the spring of 1942 and establish new lives in the United States, but Lucien and Marthe were not so lucky. Rounded up during an SS raid in September 1943, they were deported and murdered in Auschwitz-Birkenau two months later. As the only diary by an observant Jew raised bi-culturally in French and German, Dreyfus's writing offers a unique philosophical and moral reflection on the Holocaust as it was unfolding in France.