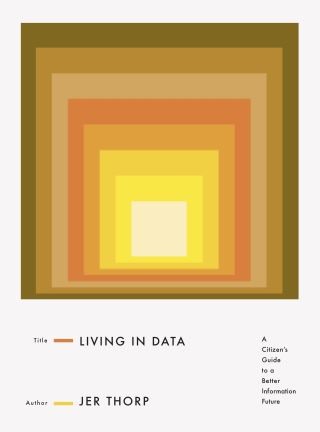 A Citizen's Guide to a Better Information Future

Jer Thorp’s analysis of the word “data” in 10,325 New York Times stories written between 1984 and 2018 shows a distinct trend: among the words most closely associated with “data,” we find not only its classic companions “information” and “digital,” but also a variety of new neighbors—from “scandal” and “misinformation” to “ethics,” “friends,” and “play.”

To live in data in the twenty-first century is to be incessantly extracted from, classified and categorized, statisti-fied, sold, and surveilled. Data—our data—is mined and processed for profit, power, and political gain. In Living in Data, Thorp asks a crucial question of our time: How do we stop passively inhabiting data, and instead become active citizens of it?

Threading a data story through hippo attacks, glaciers, and school gymnasiums, around colossal rice piles, and over active minefields, Living in Data reminds us that the future of data is still wide open, that there are ways to transcend facts and figures and to find more visceral ways to engage with data, that there are always new stories to be told about how data can be used.

Punctuated with Thorp's original and informative illustrations, Living in Data not only redefines what data is, but reimagines who gets to speak its language and how to use its power to create a more just and democratic future. Timely and inspiring, Living in Data gives us a much-needed path forward.

Jer Thorp: Jer Thorp is an artist, a writer, and a teacher. He was the first data artist in residence at The New York Times, he is a National Geographic Explorer, and he served as the innovator in residence at the Library of Congress in 2017 and 2018. He lives under the Manhattan Bridge with his family and his awesome dog, Trapper John, MD. Living in Data is his first book.