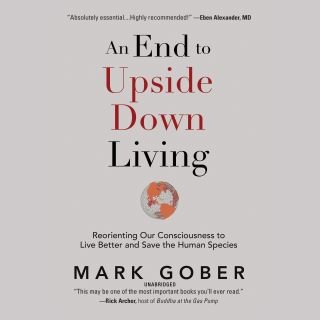 An End to Upside Down Living

Reorienting Our Consciousness to Live Better and Save the Human Species

What drives all of your life’s priorities, values, and decisions?

In the sequel to An End to Upside Down Thinking, Mark Gober builds a science-based worldview from which we can create a compass for living. In stark contrast to his prior belief system, Gober explains why life is actually full of meaning. From this perspective, he lays out how we might approach life accordingly, along with the well-traveled “awakening” path that we’re likely to encounter.

At this pivotal juncture in human history, approaching life in a new way is the antidote that our civilization desperately needs.

Mark Gober is an author whose worldview was turned upside down in late 2016 when he was exposed to world-changing science. This science suggested that contrary to mainstream assumptions, consciousness is not produced by the brain. After researching extensively, he wrote An End to Upside Down Thinking to introduce the general public to these cutting-edge ideas—all in an effort to encourage a much-needed global shift in scientific and existential thinking. Mark is a senior member of Sherpa Technology Group in Silicon Valley, a firm that advises technology companies on mergers and acquisitions and strategy. He previously worked as an investment banking analyst in New York. Mark has been quoted for his opinions on business and technology matters in Bloomberg Businessweek and elsewhere, and he has authored internationally published business articles. He graduated magna cum laude from Princeton University, where he was captain of the tennis team.