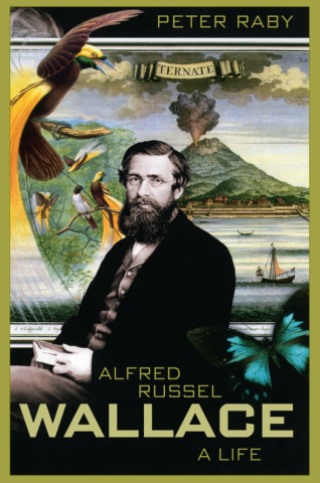 In 1858, Alfred Russel Wallace, aged thirty-five, weak with malaria, isolated in the Spice Islands, wrote to Charles Darwin: he had, he said excitedly, worked out a theory of natural selection. Darwin was aghast--his work of decades was about to be scooped. Within two weeks, his outline and Wallace's paper were presented jointly in London. A year later, with Wallace still on the opposite side of the globe, Darwin published On the Origin of Species.

This new biography of Wallace traces the development of one of the most remarkable scientific travelers, naturalists, and thinkers of the nineteenth century. With vigor and sensitivity, Peter Raby reveals his subject as a courageous, unconventional explorer and a man of exceptional humanity. He draws more extensively on Wallace's correspondence than has any previous biographer and offers a revealing yet balanced account of the relationship between Wallace and Darwin.

Wallace lacked Darwin's advantages. A largely self-educated native of Wales, he spent four years in the Amazon in his mid-twenties collecting specimens for museums and wealthy patrons, only to lose his finds in a shipboard fire in the mid-Atlantic. He vowed never to travel again. Yet two years later he was off to the East Indies on a vast eight-year trek; here he discovered countless species and identified the point of divide between Asian and Australian fauna, 'Wallace's Line.'

After his return, he plunged into numerous controversies and published regularly until his death at the age of ninety, in 1913. He penned a classic volume on his travels, founded the discipline of biogeography, promoted natural selection, and produced a distinctive account of mind and consciousness in man. Sensitive and self-effacing, he was an ardent socialist--and spiritualist. Wallace is one of the neglected giants of the history of science and ideas. This stirring biography--the first for many years--puts him back at center stage, where he belongs.

Peter Raby: Peter Raby lectures in Drama and English at Homerton College, University of Cambridge. He is the author of the widely praised biography Samuel Butler, Bright Paradise: Victorian Scientific Travellers (Princeton), Fair Ophelia: A Life of Harriet Smithson Berlioz, and Aubrey Beardsley and the 1890s. He also writes extensively on theater and is editor of The Cambridge Companion to Oscar Wilde and The Cambridge Companion to Pinter (forthcoming).