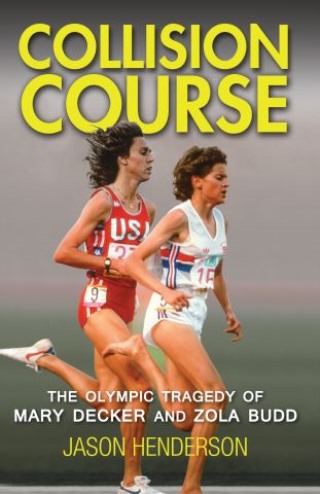 The Olympic Tragedy of Mary Decker and Zola Budd

The true story of two elite runners and a disastrous race at the 1984 Los Angeles Olympics.

The Olympic crowds—as well as millions of viewers at home—were looking forward to watching South African-born barefoot runner Zola Budd, representing Britain, in competition against the American favorite Mary Decker. But as the two ran in close proximity during the 3000-meter race in Los Angeles, disaster struck.

Decker tumbled to the inside of the track after her legs tangled with Budd’s while the two competed for pole position. A distraught and frustrated Decker, unable to carry on, watched in tears as Maricica Puica of Romania stormed to gold while Budd, who was heavily booed by the partisan crowd in the closing stages, faded to seventh.

Using the famous Olympic moment as its focal point, Collision Course tells the story of two of the best-known athletes of the twentieth century, analyzes their place in history as pioneers of women's sport, and lifts the lid on two lives that have been filled with sporting and political intrigue that, until now, has never been fully told.

Jason Henderson: Jason Henderson began writing for Athletics Weekly in 1995 and has edited the magazine since 2001. Aged 45, he has covered four Olympics and written about athletics in The Sunday Times, Observer, Guardian, The Times and GQ. His passion for athletics was ignited as a teenager in the 1980s when he pestered his father to drive him from their home in Blackpool to track meetings as far afield as Cwmbran and Crystal Palace to watch Zola Budd's early races in the UK.