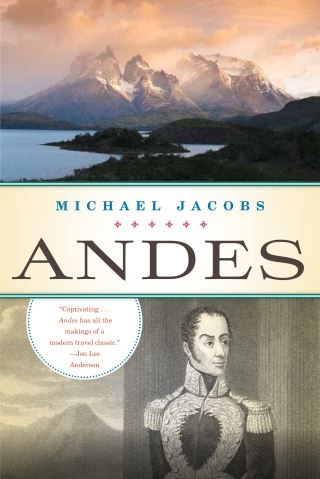 For centuries, the Andes have caught the imagination of travelers, inspiring fear and wonder. The groundbreaking scientist Alexander von Humboldt claimed that ""everything here is grander and more majestic than in the Swiss Alps, the Pyrenees, the Carpathians, the Apennines, and all other mountains I have known."" Rivaled in height only by the Himalayas and stretching more than 4,500 miles, the sheer immensity of the Andes is matched by its concentration of radically contrasting scenery and climates, and the rich and diverse cultures of the people who live there.

In this remarkable book, travel writer Michael Jacobs journeys across seven different countries, from the balmy Caribbean to the inhospitable islands of the Tierra del Fuego, through the relics of ancient civilizations and the remnants of colonial rule, retracing the footsteps of previous travelers. His route begins in Venezuela, following the path of the great nineteenth–century revolutionary Simón Bolívar, but soon diverges to include accounts from sources as varied as Humboldt, the young Charles Darwin, and Bolívar's extraordinary and courageous mistress, Manuela Saenz. On his way, Jacobs uncovers the stories of those who have shared his fascination and discovers the secrets of a region steeped in history, science, and myth.

Michael Jacobs: Michael Jacobs was born in Italy and studied Art History at the Courtauld Institute in London. He is the author of several travel books, including Andes and The Factory of Light: Tales from My Andalucían Village, which was shortlisted for the 2004 Thomas Cook Travel Book Award. He lives in Spain and London.