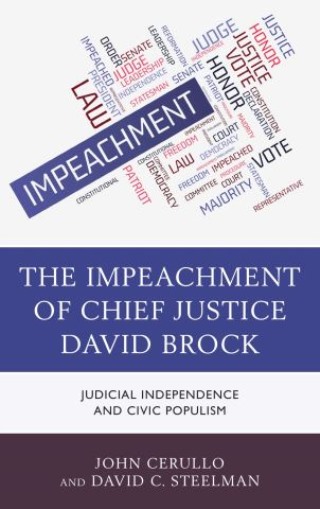 At this juncture in American history, some of our most hard-fought state-level political struggles involve control of state supreme courts. New Hampshire witnessed one of the most dramatic of these, culminating in the impeachment of Chief Justice David Brock in 2000, but the issues raised by the case are hardly confined to New Hampshire. They involved the proper nature and operation of judicial independence within a “populist” civic culture that had long assumed the primacy of the legislative branch, extolled its “citizen legislators” over insulated and professionalized elites, and entrusted those legislators to properly supervise the judiciary.

In the last few decades of the 20th Century, New Hampshire’s judiciary had been substantially reconfigured: constitutional amendments and other measures endorsed by the national judicial-modernization movement had secured for it a much higher level of independence and internal unification than it had historically enjoyed. However, a bipartisan body of legislators remained committed to the principle of legislative supremacy inscribed in the state constitution of 1784. The 1980s and 1990s witnessed a series of clashes over court administration, allegations of judicial corruption, and finally a bitter and protracted battle over Court decisions on educational funding. Chief Justice Brock publicly embodied the judicial branch's new status and assertiveness. When information came to light regarding some of his administrative actions on the high court, deepening antipathy toward him exploded into an impeachment crisis.

The struggle over Brock’s conduct raised significant questions about the meaning and proper practice of impeachment itself as a feature of democratic governance. When articles of impeachment were voted by the House of Representatives, the state Senate faced the difficult task of establishing trial protocols that would balance the political and juridical responsibilities devolved on them, simultaneously, by the state constitution. Having struck that balance, the trial they conducted would finally acquit Brock of all charges. Nevertheless, David Brock’s impeachment was a highly consequential ordeal that provided a needed catalyst for reforms intended to produce a productive recalibration of legislative-judicial relations.

John Cerullo: John Cerullo is professor emeritus at the University of New Hampshire at Manchester.

David C. Steelman was regional vice president for the National Center for State Courts.|||John Cerullo is professor emeritus at the University of New Hampshire at Manchester.