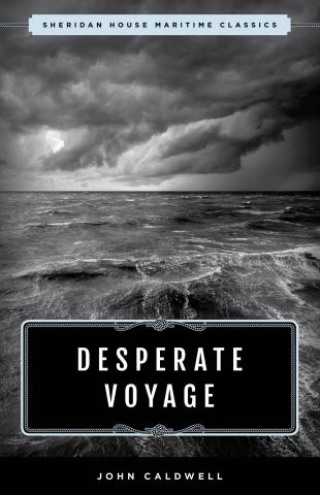 In May 1946 John Caldwell set out to sail from Panama to Sydney to reunite with his wife who he hadn't seen for more than a year. Eager to reach his destination and unable to secure any other form of transport, he had to resort to singlehanded seamanship.

After an ignominious scene in the harbor, where a tangled anchor led him to take an early dip, he spent ten days learning the rudiments of navigation and sailing from a book, before embarking on the 9,000 mile journey aboard the 20-foot Pagan. Ahead lay a mission that was to reveal in him elements not only of astounding courage and determination, but also of incredible foolhardiness. Within 500 miles of Panama John Caldwell had already been shipwrecked once and had his boat's engine and cockpit destroyed by an angry shark. Indefatigable, he decided to press on towards his goal.He endured the terrors and discomforts of life on the high seas and enjoyed the triumphs of fighting and winning against the elements.

This is more than an exciting tale of sea-adventure. It is as compelling and unpredictable as a thriller. It is the story, witty and moving, of a man, motivated initially by love, and ultimately by his own fierce determination to survive.

John Caldwell: John Caldwell went on to graduate from the University of California Santa Barbara. He sailed all over the world with his wife Mary and their two sons. While sailing in the Caribbean he caught a glimpse of his dream island, Prune Island. He obtained a 99-year lease on the island, planted palms, renamed it Palm Island and established his own resort. The rest of his life was spent sailing around the islands he loved and sharing his passion with lucky visitors to his Caribbean paradise.