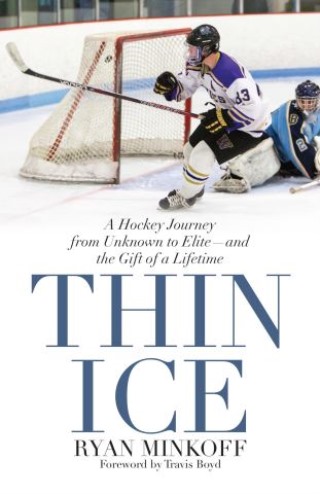 Ryan Minkoff was blessed with athleticism, perseverance, and an unquenchable passion for playing hockey. His journey to the pros against lofty odds was, as he says, “unconventional.”

Minkoff’s love for the game began in Minnesota, the State of Hockey, where his youth and high-school experiences were anything but ordinary. His suitcase always packed, he played for seven different hockey programs in a fourteen-year span. While Minkoff’s confidence wavered and was often challenged, his determination and passion stayed strong, and he found his way to the University of Washington to play in the unfamiliar world of club hockey. Despite discouraging circumstances, such as games in empty arenas starting well after midnight to hitchhiking home after a long road trip, Minkoff not only set records, captained the squad, and ran the club as the president, he also formed strong bonds with his coaches and teammates. Following an illustrious club career, Minkoff landed in the professional ranks of Finland, where—in the midst of nearly crashing a Zamboni, acting as the town’s Santa Claus, and sleeping at the rink—he truly discovered his gift of a lifetime in the game of hockey.

Thin Ice is an honest, witty, inspirational coming-of-age story. Ryan Minkoff’s debut memoir is for anyone who roots for an underdog whose dreams will not fade no matter the obstacles.

Ryan Minkoff: Ryan Minkoff is the founder and owner of 83, LLC, a global ice hockey agency representing players at the professional level. An economics and entrepreneur graduate of the University of Washington, he became the first player from that school play pro hockey with Lapuan Virkia,a top Finnish club—a signing that garnered g the attention of Derek Jeter’s The Player’s Tribune.