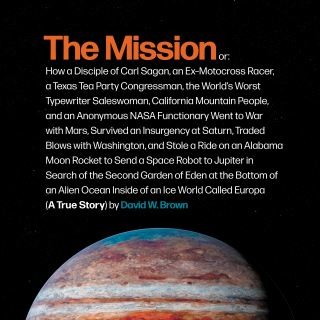 A masterful, genre-defying narrative of the most ambitious science project ever conceived: NASA’s deep-space mission to Europa—the Jovian moon where might swim the first known alien life in our solar system—powered by a motley team of obsessives and eccentrics.

When scientists discovered the first ocean beyond Earth, they had two big questions: “Is it habitable?” and “How do we get there?” To answer the first, they had to answer the second, and so began a vivacious team’s twenty-year odyssey to mount a mission to Europa, the ocean moon of Jupiter.

Standing in their way: NASA, fanatically consumed with landing robots on Mars; the White House, which never saw a science budget it couldn’t cut; Congress, fixated on going to the moon or Mars—anywhere, really, to give astronauts something to do; rivals in academia, who wanted instead to go to Saturn; and even Jupiter itself, which guards Europa in a pulsing, rippling, radiation belt—a halo of death whose conditions are like those that follow a detonated thermonuclear bomb.

The Mission, or: How a Disciple of Carl Sagan, an Ex-Motocross Racer, a Texas Tea Party Congressman, the World's Worst Typewriter Saleswoman, California Mountain People, and an Anonymous NASA Functionary Went to War with Mars, Survived an Insurgency at Saturn, Traded Blows with Washington, and Stole a Ride on an Alabama Moon Rocket to Send a Space Robot to Jupiter in Search of the Second Garden of Eden at the Bottom of an Alien Ocean Inside of an Ice World Called Europa (A True Story) is the Homeric, never-before-told story of modern space exploration, and a magnificent portrait of the inner lives of scientists who study the solar system’s mysterious outer planets. David W. Brown chronicles the remarkable saga of how Europa was won, and what it takes to get things done—down here, and up there.

Written with verve, humor, and uncanny empathy, The Mission is an exuberant masterclass in how a few determined cogs can change an entire machine.

David W. Brown is a freelance writer whose nonfiction appears frequently in The Atlantic, The New Yorker, and the New York Times. His work can also be found in Scientific American, Vox, and Smithsonian. He is an Antarctic expeditioner, an endurance runner, a former U.S. Army paratrooper, and a veteran of Afghanistan. He is a graduate of Louisiana State University and holds a Master of Fine Arts in creative writing from the University of Arkansas at Monticello. The Mission is his fourth book. Brown lives in New Orleans, Louisiana.