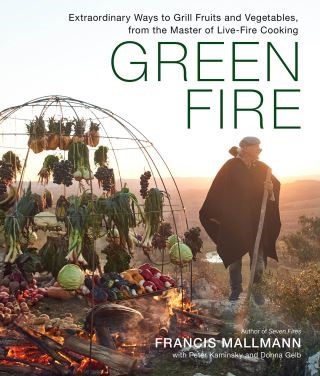 Extraordinary Ways to Grill Fruits and Vegetables, from the Master of Live-Fire Cooking

Green Fire is an extraordinary vegetarian cookbook, as Mallmann brings his techniques, creativity, instinct for bold flavors, and decades of experience to the idea of cooking vegetables and fruits over live fire. Blistered tomatoes reinvigorate a classic Caprese salad. Eggplants are buried whole in the coals—a technique called rescoldo—then dance that fine line between burned and incinerated until they yield an ineffable creaminess made irresistible with a slather of parsley, chile, and aioli. Brussels sprout leaves are scorched and served with walnuts; whole cabbages are sliced thick, grilled like steaks, and rubbed with spice for a mustard-fennel crust. Corn, fennel, artichokes, beets, squash, even beans—this is the vegetable kingdom, on fire.

The celebrated Patagonian chef, known for his mastery of flame and meat, the chef who romanced the food world with an iconic image of a whole cow dressed and splayed out over licking flames, is returning to the place where his storied career began—the garden and all its bounty. It’s his new truth: the transformation wrought by flame, coals, and smoke on a carrot or peach is nothing short of alchemy.

And just as he’s discovered that a smoky, crackling-crusted potato cooked on the plancha is as sublime as the rib-eye he used to serve it next to, Mallmann’s also inspired by another truth: we all need to cut down on consuming animals to ensure a healthier future for both people and the planet. Time to turn the fire “green.”

Cooking with fire demands both simplicity and perfection. But the results are pure magic. By using this oldest of cooking techniques, you’ll discover fruits and vegetables pushed to such a peak of flavor it’s as if they’d never been truly tasted before.

Francis Mallmann:
Francis Mallmann, author of Seven Fires and Mallmann on Fire, is the reigning star of food television in the Spanish-speaking world, and the most famous and popular chef in South America. His restaurants include Siete Fuegos at the Vines Resort & Spa in Argentina’s wine country; Patagonia Sur in Buenos Aires; El Garzón in Uruguay; 1884 Restaurante in Mendoza, Argentina (named one of Latin America’s 50 Best Restaurants); and Los Fuegos in Miami. USA Today and the Times (London) have named his restaurants among the top 10 places to eat in the world. Most recently, Mallmann was the subject of the Netflix documentary series Chef’s Table.