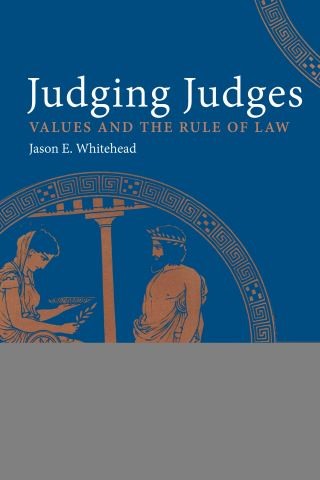 Values and the Rule of Law

The "rule of law" stands at the heart of the American legal system. But the rule of law does not require judges slavishly to follow the letter of the law, unaffected by political or social influences. Because following the rule of law absolutely is impossible, it is dismissed by the public as a myth and judges are vilified.

Judging Judges refocuses and elevates the debate over judges and the rule of law by showing that personal and professional values matter. Jason E. Whitehead demonstrates that the rule of law depends on a socially constructed attitude of legal obligation that spawns objective rules. Intensive interviews of judges reveal the value systems that uphold or undermine the attitude of legal obligation so central to the rule of law. This focus on the social practices undergirding these value systems demonstrates that the rule of law is ultimately a matter of social trust rather than textual constraints. Whitehead's unique combination of philosophical and empirical investigation is a major advance because it moves beyond the dichotomy of law or politics and shows that the rule of law is a shared social enterprise involving all of society—judges, politicians, scholars, and ordinary citizens alike. Judging Judges' attention to judicial values establishes judges' true worth in a liberal democracy.