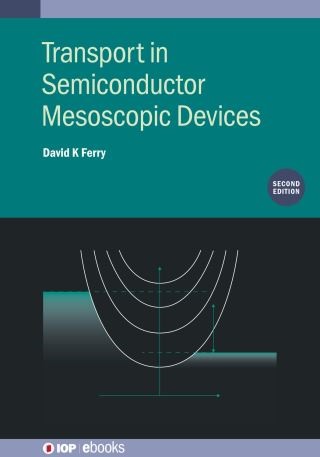 This textbook introduces the physics and applications of transport in mesoscopic devices and nanoscale electronic systems and devices. This expanded second edition is fully updated and contains the latest research in the field, including nano-devices for qubits, from both silicon quantum dots and superconducting SQUID circuits. Each chapter has worked examples, problems and solutions, and videos are provided as supplementary material.

Intended as a textbook for first-year graduate courses in nanoelectronics or mesoscopic physics, the book is also a valuable reference text for researchers interested in nanostructures, and useful supplementary reading for advanced courses in quantum mechanics and electronic devices.

David K Ferry: David Ferry is Regents’ Professor Emeritus in the School of Electrical, Computer, and Energy Engineering at Arizona State University. He was also graduate faculty in the Department of Physics and the Materials Science and Engineering program at ASU, as well as Visiting Professor at Chiba University in Japan. He came to ASU in 1983 following shorter stints at Texas Tech University, the Office of Naval Research, and Colorado State University. In the distant past, he received his doctorate from the University of Texas, Austin, and spent a postdoctoral period at the University of Vienna, Austria. He enjoys teaching (which he refers to as “warping young minds”) and research. The latter is focused on semiconductors, particularly as they apply to nanotechnology and integrated circuits, as well as quantum effects in devices. In 1999, he received the Cledo Brunetti Award from the Institute of Electrical and Electronics Engineers, and is a Fellow of this group as well as the American Physical Society and the Institute of Physics (UK). He has been a Tennessee Squire since 1971 and an Admiral in the Texas Navy since 1973. He is the author, co-author, or editor of some 40 books and about 900 refereed scientific contributions.