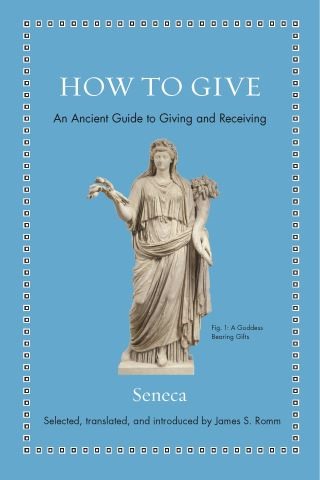 An Ancient Guide to Giving and Receiving

To give and receive well may be the most human thing you can do—but it is also the closest you can come to divinity. So argues the great Roman Stoic thinker Seneca (c. 4 BCE–65 CE) in his longest and most searching moral treatise, “On Benefits” (De Beneficiis). James Romm’s splendid new translation of essential selections from this work conveys the heart of Seneca’s argument that generosity and gratitude are among the most important of all virtues.

For Seneca, the impulse to give to others lies at the very foundation of society; without it, we are helpless creatures, worse than wild beasts. But generosity did not arise randomly or by chance. Seneca sees it as part of our desire to emulate the gods, whose creation of the earth and heavens stands as the greatest gift of all. Seneca’s soaring prose captures his wonder at that gift, and expresses a profound sense of gratitude that will inspire today’s readers.

Complete with an enlightening introduction and the original Latin on facing pages, How to Give is a timeless guide to the profound significance of true generosity.

Seneca: James Romm is the editor and translator of Seneca’s How to Keep Your Cool and How to Die (both Princeton) and the author of Dying Every Day: Seneca at the Court of Nero. He has written for the Wall Street Journal, the New York Review of Books, and the London Review of Books, among other publications. He is the James H. Ottaway Jr. Professor of Classics at Bard College and lives in Barrytown, New York.