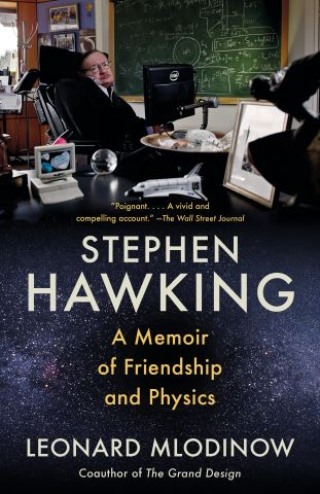 A Memoir of Friendship and Physics

This “vivid and compelling account” (The Wall Street Journal) opens not only the inner workings of one of physics’ greatest minds, but also a view into an extraordinary friendship and the human capacity to overcome insurmountable challenges.

One of the most influential physicists of our time, Stephen Hawking touched the lives of millions. Recalling his nearly two decades as Hawking’s collaborator and friends, Leonard Mlodinow brings this complex man into focus in a unique and deeply personal portrayal. We meet Hawking the genius, who pours his mind into uncovering the mysteries of the universe—ultimately formulating a pathbreaking theory of black holes that reignites the discipline of cosmology and paves the way for physicists to investigate the origins of the universe in completely new ways. We meet Hawking the colleague, a man whose illness leaves him able to communicate at only six words per minute but who expends the effort to punctuate his conversations with humor. And we meet Hawking the friend, who can convey volumes with a frown, a smile, or simply a raised eyebrow.

Mlodinow puts us in the room as Hawking indulges his passion for wine and curry; shares his feelings on love, death, and disability; and grapples with deep questions of philosophy and physics. Whether depicting Hawking’s devotion to his work or demonstrating how he would make spur of the moment choices, such as punting on the River Cam (despite the risk the jaunt posed), or spinning tales of Hawking defiantly urinating in the hedges outside a restaurant that doesn’t have a wheelchair accessible toilet, Mlodinow captures his indomitable spirit. This moving account of a friendship offers us invaluable lessons from one of physics’ greatest practitioners about life, the universe, and the ability to overcome daunting obstacles.

Leonard Mlodinow: LEONARD MLODINOW received his PhD in theoretical physics from the University of California, Berkeley, was an Alexander von Humboldt Fellow at the Max Planck Institute, and was on the faculty of the California Institute of Technology. His previous books include the best sellers The Grand Design and A Briefer History of Time (both with Stephen Hawking), Subliminal (winner of the PEN/E. O. Wilson Literary Science Writing Award), and War of the Worldviews (with Deepak Chopra), as well as Elastic, Euclid’s Window, Feynman’s Rainbow, and The Upright Thinkers.