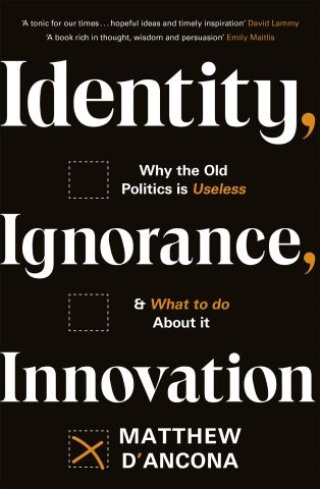 'D'Ancona makes his case well... The book is well written and thoughtful' -- The Times

'A heartfelt attempt to renew liberal ideals for the coming decades... How sorely our public debate needs others to express themselves similarly.' -- Henry Mance, Financial Times

'An urgent and exhilarating account of how populism, prejudice & polarisation have corrupted objective truth and public discourse. D'Ancona's sparkling prose provides an explanation of how we got here and, crucially, how we might get out.' -- James O'Brien

'A book so rich in thought, wisdom and persuasion I find myself sharing the ideas within it with everyone I meet... In the much-mourned absence of Christopher Hitchens, d'Ancona is fast becoming the voice of enlightenment for our bewildered age.' -- Emily Maitlis

'A tonic for our times that blows open any complacency following Trump's defeat that the demise of populism and nativism is inevitable. In beautifully written prose, D'Ancona puts forward hopeful ideas and timely inspiration for a progressive politics to replace it.' -- David Lammy

'D'Ancona's regular practical suggestions help to take it beyond mere theory and into the real world... Decision-makers would do well to read it.' -- Charlotte Henry, TLS

This is a call to arms.

The old tools of political analysis are obsolete - they have rusted and are no longer fit for purpose. We've grown lazy, wedded to the assumption that, after ruptures such as Brexit, the pandemic, and the rise of the populist Right, things will eventually go 'back to normal'.

In this ground-breaking book, he proposes a new way of understanding our era and plots a way forward. With rigorous analysis, he argues that we need to understand the world in a new way, with a framework built from the three I's: Identity, Ignorance and Innovation.

Matthew d'Ancona: Matthew d'Ancona is an award-winning journalist and author. He is an Editor and Partner at Tortoise Media, and was previously Editor of The Spectator, lifting the magazine to record circulation. He has written columns for the Evening Standard, Guardian, Daily and Sunday Telegraph, GQ, and the International New York Times. He is a Visiting Research Fellow at Queen Mary University of London, and was elected a Fellow of All Souls College, Oxford, in 1989. He has two sons and lives in London.