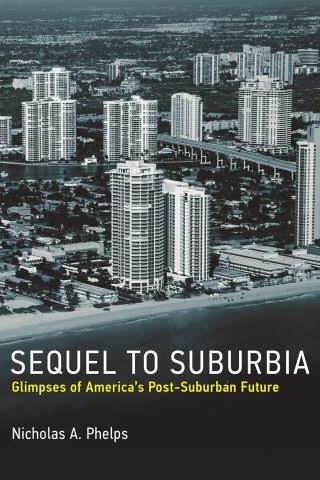 How the decentralized, automobile-oriented, and fuel-consuming model of American suburban development might change.

In the years after World War II, a distinctly American model for suburban development emerged. The expansive rings of outer suburbs that formed around major cities were decentralized and automobile oriented, an embodiment of America's postwar mass-production, mass-consumption economy. But alternate models for suburbia, including “transit-oriented development,” “smart growth,” and “New Urbanism,” have inspired critiques of suburbanization and experiments in post-suburban ways of living. In Sequel to Suburbia, Nicholas Phelps considers the possible post-suburban future, offering historical and theoretical context as well as case studies of transforming communities.

Phelps first locates these outer suburban rings within wider metropolitan spaces, describes the suburbs as a “spatial fix” for the postwar capitalist economy, and examines the political and governmental obstacles to reworking suburban space. He then presents three glimpses of post-suburban America, looking at Kendall-Dadeland (in Miami-Dade County, Florida), Tysons Corner (in Fairfax County, Virginia), and Schaumburg, Illinois (near Chicago). He shows Kendall-Dadeland to be an isolated New Urbanism success; describes the re-planning of Tysons Corner to include a retrofitted central downtown area; and examines Schaumburg's position as a regional capital for Chicago's northwest suburbs. As these cases show, the reworking of suburban space and the accompanying political process will not be left to a small group of architects, planners, and politicians. Post-suburban politics will have to command the approval of the residents of suburbia.

Nicholas A. Phelps: Nicholas Phelps is Professor of Urban and Regional Development at University College London and the author of An Anatomy of Sprawl: Planning and Politics in Britain.