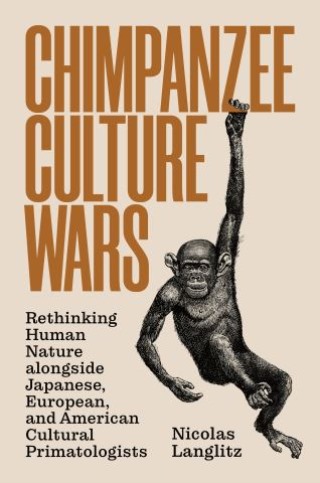 In the 1950s, Japanese zoologists took note when a number of macaques invented and passed on new food-washing behaviors within their troop. The discovery opened the door to a startling question: Could animals other than humans share social knowledge—and thus possess culture? The subsequent debate has rocked the scientific world, pitting cultural anthropologists against evolutionary anthropologists, field biologists against experimental psychologists, and scholars from Asia against their colleagues in Europe and North America. In Chimpanzee Culture Wars, the first ethnographic account of the battle, anthropologist Nicolas Langlitz presents first-hand observations gleaned from months spent among primatologists on different sides of the controversy.

Langlitz travels across continents, from field stations in the Ivory Coast and Guinea to laboratories in Germany and Japan. As he compares the methods and arguments of the different researchers he meets, he also considers the plight of cultural primatologists as they seek to document chimpanzee cultural diversity during the Anthropocene, an era in which human culture is remaking the planet. How should we understand the chimpanzee culture wars in light of human-caused mass extinctions?

Capturing the historical, anthropological, and philosophical nuances of the debate, Chimpanzee Culture Wars takes us on an exhilarating journey into high-tech laboratories and breathtaking wilderness, all in pursuit of an answer to the question of the human-animal divide.

Nicolas Langlitz: Nicolas Langlitz is associate professor of anthropology at the New School for Social Research. His books include Neuropsychedelia: The Revival of Hallucinogen Research since the Decade of the Brain. Twitter @NicolasLanglitz