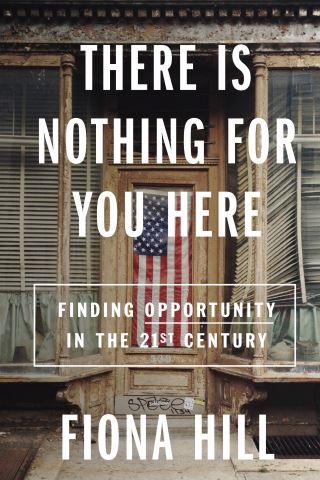 There Is Nothing For You Here

Finding Opportunity in the Twenty-First Century

"This book has a miraculous quality.... As a memoir this is hard to put down; if you are seeking a better American future you should pick it up.”—Timothy Snyder, New York Times best-selling author of On Tyranny

INSTANT NEW YORK TIMES BESTSELLER | A celebrated foreign policy expert and key impeachment witness reveals how declining opportunity has set America on the grim path of modern Russia—and draws on her personal journey out of poverty, as well as her unique perspectives as an historian and policy maker, to show how we can return hope to our forgotten places.

Fiona Hill grew up in a world of terminal decay. The last of the local mines had closed, businesses were shuttering, and despair was etched in the faces around her. Her father urged her to get out of their blighted corner of northern England: “There is nothing for you here, pet,” he said.

The coal-miner’s daughter managed to go further than he ever could have dreamed. She studied in Moscow and at Harvard, became an American citizen, and served three U.S. Presidents. But in the heartlands of both Russia and the United States, she saw troubling reflections of her hometown and similar populist impulses. By the time she offered her brave testimony in the first impeachment inquiry of President Trump, Hill knew that the desperation of forgotten people was driving American politics over the brink—and that we were running out of time to save ourselves from Russia’s fate. In this powerful, deeply personal account, she shares what she has learned, and shows why expanding opportunity is the only long-term hope for our democracy.

“Of every book written by anybody associated with the Trump administration, in any way, [this] is absolutely the one to read.”—Rachel Maddow

FIONA HILL is the Robert Bosch Senior Fellow at the Center on the United States and Europe in the Foreign Policy program at the Brookings Institution. From 2017 to 2019, she served as deputy assistant to the president and senior director for European and Russian affairs on the National Security Council. From 2006 to 2009, she served as national intelligence officer for Russia and Eurasia at the National Intelligence Council. She has researched and published extensively on issues related to Russia, the Caucasus, Central Asia, regional conflicts, energy, and strategic issues. Coauthor of Mr. Putin: Operative in the Kremlin and The Siberian Curse: How Communist Planners Left Russia Out in the Cold, she holds a master’s degree in Soviet studies and a doctorate in history from Harvard University and a master’s in Russian and modern history from St. Andrews University in Scotland. She also has pursued studies at Moscow’s Maurice Thorez Institute of Foreign Languages. Hill is a member of the Council on Foreign Relations and lives in the Washington, DC, area.