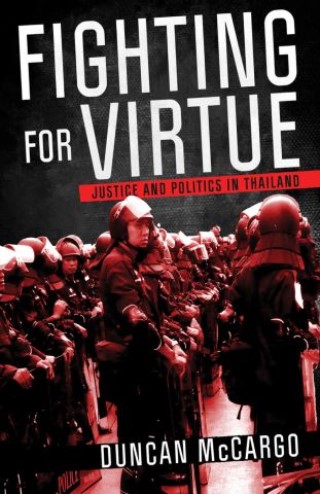 Justice and Politics in Thailand

Fighting for Virtue investigates how Thailand's judges were tasked by the late King Bhumibol Adulyadej (Rama IX) in 2006 with helping to solve the country's intractable political problems—and what happened next. Across the last decade of Rama IX's rule, Duncan McCargo examines the world of Thai judges: how they were recruited, trained, and promoted, and how they were socialized into a conservative world view that emphasized the proximity between the judiciary and the monarchy.

McCargo delves into three pivotal freedom of expression cases that illuminate Thai legal and cultural understandings of sedition and treason, before examining the ways in which accusations of disloyalty made against controversial former prime minister Thaksin Shinawatra came to occupy a central place in the political life of a deeply polarized nation. The author navigates the highly contentious role of the Constitutional Court as a key player in overseeing and regulating Thailand's political order before concluding with reflections on the significance of the Bhumibol era of "judicialization" in Thailand. In the end, posits McCargo, under a new king, who appears far less reluctant to assert his own power and authority, the Thai courts may now assume somewhat less significance as a tool of the monarchical network.

Duncan McCargo is Director of the Nordic Institute of Asian Studies and Professor of Political science at the University of Copenhagen. He is author of Tearing Apart the Land, which won the inaugural Bernard Schwartz Book Prize from the Asia Society in 2009.