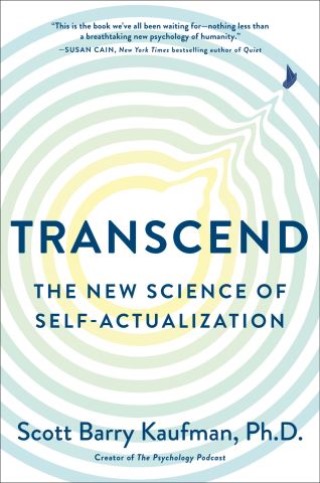 The New Science of Self-Actualization

A bold reimagining of Maslow's famous hierarchy of needs--and new insights for realizing your full potential and living your most creative, fulfilled, and connected life.

When psychologist Scott Barry Kaufman first discovered Maslow's unfinished theory of transcendence, sprinkled throughout a cache of unpublished journals, lectures, and essays, he felt a deep resonance with his own work and life. In this groundbreaking book, Kaufman picks up where Maslow left off, unraveling the mysteries of his unfinished theory, and integrating these ideas with the latest research on attachment, connection, creativity, love, purpose and other building blocks of a life well lived.

Kaufman's new hierarchy of needs provides a roadmap for finding purpose and fulfillment--not by striving for money, success, or "happiness," but by becoming the best version of ourselves, or what Maslow called self-actualization. While self-actualization is often thought of as a purely individual pursuit, Maslow believed that the full realization of potential requires a merging between self and the world. We don't have to choose either self-development or self-sacrifice, but at the highest level of human potential we show a deep integration of both. Transcend reveals this level of human potential that connects us not only to our highest creative potential, but also to one another.

With never-before-published insights and new research findings, along with exercises and opportunities to gain insight into your own unique personality, this empowering book is a manual for self-analysis and nurturing a deeper connection not only with our highest potential but also with the rest of humanity.

Scott Barry Kaufman: Scott Barry Kaufman, PhD is a humanistic psychologist who has taught at Columbia University, the University of Pennsylvania, NYU and elsewhere. He received his Ph.D. in cognitive psychology from Yale University, and an M.Phil in experimental psychology from the University of Cambridge under a Gates Cambridge Scholarship. He writes the column Beautiful Minds for Scientific American and hosts The Psychology Podcast, which has received more than 10 million downloads. His writing has appeared in The Atlantic and Harvard Business Review, and his books include Ungifted, Wired to Create (with Carolyn Gregoire), and, as editor, Twice Exceptional and, as co-editor, The Cambridge Handbook of Intelligence. In 2015, he was named one of "50 Groundbreaking Scientists who are changing the way we see the world" by Business Insider.