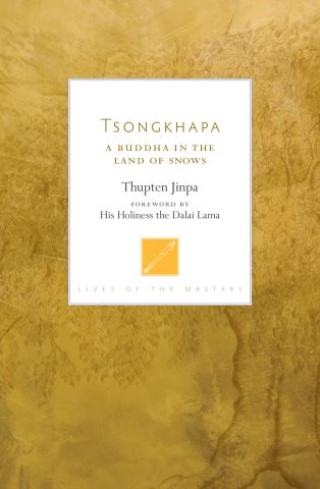 A Buddha in the Land of Snows

The new standard work and definitive biography of Tsongkhapa, one of the principle founders of the Gelug school of Tibetan Buddhism--the school of the Dalai Lamas.

In this groundbreaking addition to the Lives of the Masters series, Thupten Jinpa, a scholar-practitioner and long-time translator for His Holiness the Dalai Lama, offers the most comprehensive portrait available of Jé Tsongkhapa (1357–1419), one of the greatest Buddhist teachers in history. A devout monastic, Tsongkhapa took on the difficult task of locating and studying all of the Indian Buddhist classics available in Tibet in his day. He went on to synthesize this knowledge into a holistic approach to the path of awakening. In an achievement of incredible magnitude, he integrated the pivotal yet disparate Mahayana teachings on emptiness while retaining the important role of critical reason and avoiding the extreme of negating the reality of the everyday world.

Included in this volume is a discussion of Tsongkhapa’s early life and training; his emergence as a precociously intelligent Buddhist mind; the composition of his Great Treatise on the Stages of the Path to Enlightenment, Great Exposition of Tantra, and many other important works; and his founding of the Lhasa Prayer Festival and Ganden Monastery. This is a necessary resource for anyone interested in Tsongkhapa’s transformative effect on the understanding and practice of Buddhism in Tibet in his time and his continued influence today.

Thupten Jinpa: THUPTEN JINPA is a former monk and holds a Ph.D. from Cambridge University, where he also worked as a research fellow. Among other books, he is the author of Self, Reality and Reason in Tibetan Philosophy: Tsongkhapa's Quest for the Middle Way. Jinpa has been the principal English translator to H. H. the Dalai Lama for more than twenty-five years and has translated and edited numerous books by the Dalai Lama. Jinpa is an adjunct professor at the Faculty of Religious Studies at McGill University, Montreal, and Chairman of the Mind and Life Institute, which is dedicated to promoting dialogues and collaborations between the sciences and contemplative knowledge, especially Buddhism.