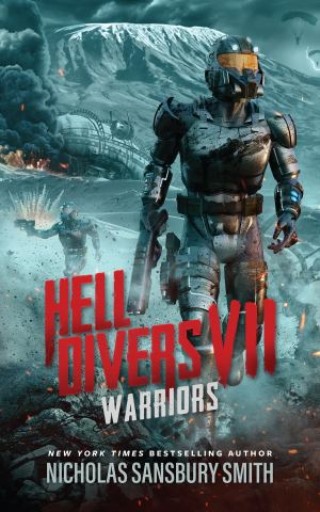 While the Hell Divers cross an ocean to battle the machines, an old flesh-and-blood threat returns to the islands.

The mission to Rio de Janeiro ended in victory, but it came at a dire cost, killing most of those who set out to rescue the stranded survivors. Even worse, the skinwalkers’ leader, Horn, escaped with his demonic crew and is coming to take the throne.

Back at the Vanguard Islands, King Xavier Rodriguez has been severely injured in another battle to protect the kingdom. Now an infection threatens to kill the one man who can keep the peace. As he fights for survival, new intel from Rio de Janeiro gives humanity hope of destroying the biggest threat of all: the machines—if the machines don’t find the Vanguard Islands first.

Nicholas Sansbury Smith is the New York Times and USA Today bestselling author of the Hell Divers series, the Orbs series, the Trackers series, the Extinction Cycle series, the Sons of War series, and the new E-Day series. He worked for Iowa Homeland Security and Emergency Management in disaster mitigation before switching careers to focus on storytelling. When he isn’t writing or daydreaming about the apocalypse, he enjoys running, biking, spending time with his family, and traveling the world. He is an Ironman triathlete and lives in Iowa with his wife, daughter, and their dogs.