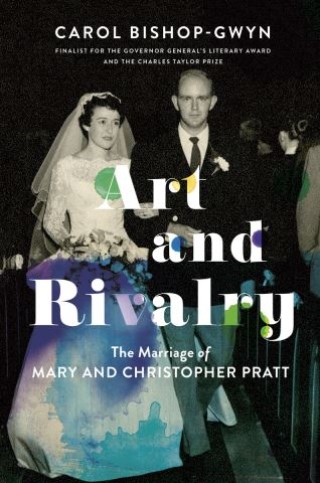 The Marriage of Mary and Christopher Pratt

The unauthorized biography of Canada's most famous artist couple and the rivalry that drove them.

She painted as if with pure light, radiant colours making quotidian kitchen scenes come alive with sublimated drama. He painted like clockwork, each stroke precise and measured with exquisite care, leaving no angle unchecked and no subtlety of tone unattended. Some would say Mary Pratt was fire and Christopher, ice. And yet Newfoundland's Frida Kahlo and Diego Rivera (or Jackson Pollack and Lee Krasner...) presented their marriage as a portrait of harmony and balance. But balance off the canvas rarely makes great art, and the Pratts' art was spectacular.
As a youth at Mount Allison University in New Brunswick, Mary pursued her future husband, a prodigious art talent, and supported his determination to study painting instead of medicine. They married and removed themselves to a Newfoundland outport where his painting alone provided the means to raise a family. But as Mary's own talents became evident and she sought her own hours at the easel, when not raising their four children, and as rumours of Christopher's affair with a young model spread, the Pratts' harmonious exterior slowly cracked, to scandal in Newfoundland and fascination across the country. A marriage ended, and gave way to a furious competition for dominance in Canadian art.

Carol Bishop-Gwyn: CAROL BISHOP-GWYN is a former arts producer at CBC Radio and journalist, published in The Beaver, Toronto Life, Chatelaine, Maclean's and The Globe and Mail. She holds a Master of Fine Arts from York University and Master of Philosophy from the University of Surrey. Summering in Newfoundland for over a decade, she developed a deep knowledge of the province's visual arts scene, along with an excellent general knowledge of Canadian visual arts. She is a board member of the Winterset in the Summer Literary Festival, and as program chair has invited writers, musicians and visual artists to participate. Her first biography, The Pursuit of Perfection: A Life of Celia Franca, was a finalist for the 2012 Governor General's Literary Award for Non-Fiction and the Charles Taylor Prize for Literary Non-Fiction and named a Globe 100 best book of the year.