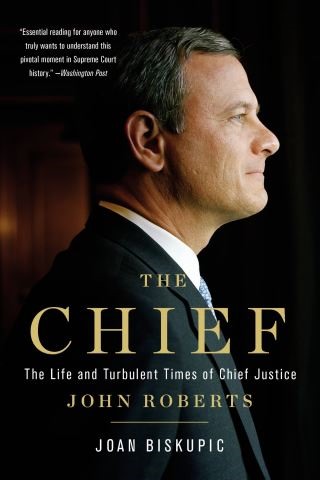 The Life and Turbulent Times of Chief Justice John Roberts

An incisive biography of the Supreme Court's enigmatic Chief Justice, taking us inside the momentous legal decisions of his tenure so far.
John Roberts was named to the Supreme Court in 2005 claiming he would act as a neutral umpire in deciding cases. His critics argue he has been anything but, pointing to his conservative victories on voting rights and campaign finance. Yet he broke from orthodoxy in his decision to preserve Obamacare. How are we to understand the motives of the most powerful judge in the land?
In The Chief, award-winning journalist Joan Biskupic contends that Roberts is torn between two, often divergent, priorities: to carry out a conservative agenda, and to protect the Court's image and his place in history. Biskupic shows how Roberts's dual commitments have fostered distrust among his colleagues, with major consequences for the law. Trenchant and authoritative, The Chief reveals the making of a justice and the drama on this nation's highest court.

Joan Biskupic: Joan Biskupic is a legal analyst at CNN. Previously, she served as an editor-in-charge for legal affairs at Reuters and as the Supreme Court correspondent for The Washington Post. A Pulitzer Prize finalist and author of books on Sandra Day O'Connor, Antonin Scalia, and Sonia Sotomayor, Biskupic lives in Washington, DC.