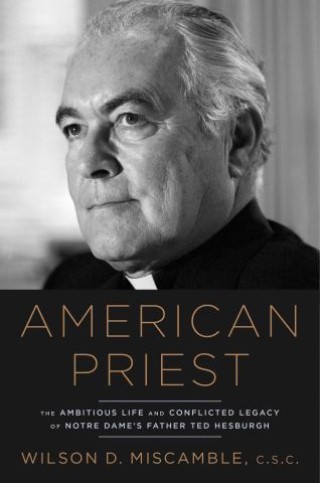 Considered for many decades to be the most influential priest in America, Rev. Theodore M. Hesburgh, played what many consider pivotal roles in higher education, the Catholic Church, and national and international affairs. American Priest examines his life and his many and varied engagements—from the university he led for thirty-five years to his associations with the Vatican and the White House—and evaluates the extent and importance of his legacy.

Author and Notre Dame priest-professor Wilson D. Miscamble tracks how Hesburgh transformed Catholic higher education in the postwar era and explores how he became a much-celebrated voice in America at large. Yet, beyond the hagiography that often surrounds Hesburgh’s legacy lies another more complex and challenging story. What exactly were his contributions to higher learning; what was his involvement in the civil rights movement; and what was the nature of his role as advisor to popes and presidents?

Understanding Hesburgh’s life and work illuminates the journey that the Catholic Church traversed over the second half of the twentieth century. Exploring and evaluating Hesburgh’s importance, then, contributes not only to the colorful history of Notre Dame but also to comprehending the American Catholic experience.

“Excellent . . . the story that Father Miscamble tells is an all-American story—the rise of a Catholic of relatively modest background, close to his immigrant roots, to a place of prominence among the nation’s elite.” —Public Discourse

Wilson D. Miscamble, C.S.C.: REVEREND WILSON D. (BILL) MISCAMBLE, C.S.C., joined the permanent faculty in the History Department at Notre Dame in 1988. He chaired the History Department from 1993 to 1998. He also served as Rector and Superior of Moreau Seminary (2000 to 2004), the principal formation site for the Congregation of Holy Cross in North America. Fr. Miscamble's primary research interests are American foreign policy since World War II and the role of Catholics in 20th-century U.S. foreign relations.