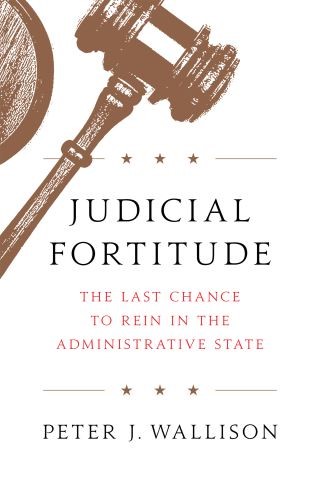 The Last Chance to Rein In the Administrative State

In this book, Peter J. Wallison argues that the administrative agencies of the executive branch have gradually taken over the legislative role of Congress, resulting in what many call the administrative state. The judiciary bears the major responsibility for this development because it has failed to carry out its primary constitutional responsibility: to enforce the constitutional separation of powers by ensuring that the elected branches of government—the legislative and the executive—remain independent and separate from one another. Since 1937, and especially with the Chevron deference adopted by the Supreme Court in 1984, the judiciary has abandoned this role. It has allowed Congress to delegate lawmaking authorities to the administrative agencies of the executive branch and given these agencies great latitude in interpreting their statutory authorities. Unelected officials of the administrative state have thus been enabled to make decisions for the American people that, in a democracy, should only be made by Congress. The consequences have been grave: unnecessary regulation has imposed major costs on the U.S. economy, the constitutional separation of powers has been compromised, and unabated agency rulemaking has created a significant threat that Americans will one day question the legitimacy of their own government. To address these concerns, Wallison argues that the courts must return to the role the Framers expected them to fulfill.

Peter J. Wallison:
Peter J. Wallison is a senior fellow at the American Enterprise Institute. Before joining AEI in 1999, he practiced law as a partner of Gibson, Dunn & Crutcher in the firm’s Washington and New York offices. He graduated from Harvard Law School in 1966. From 1974 to 1976, he was counsel to Vice President Nelson Rockefeller. He was general counsel of the Treasury Department from 1981 to 1985, and White House counsel for President Ronald Reagan from 1986 to 1987. He is the author or coauthor of several books, including Ronald Reagan: The Power of Conviction and the Success of His Presidency (2003) and Hidden in Plain Sight: What Really Caused the World’s Worst Financial Crisis and Why It Could Happen Again (Encounter Books, 2015).