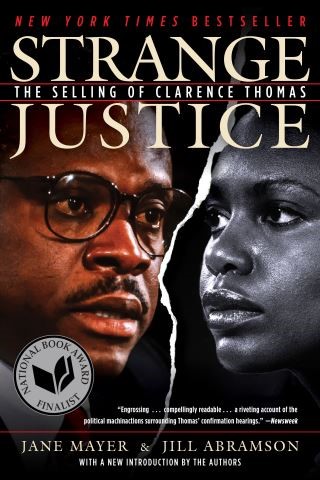 The Selling of Clarence Thomas

Now a New York Times Best Seller and a National Book Award finalist. Charged with racial, sexual, and political overtones, the confirmation of Clarence Thomas as a Supreme Court justice was one of the most divisive spectacles the country has ever seen. Anita Hill’s accusation of sexual harassment by Thomas, and the attacks on her that were part of his high-placed supporters’ rebuttal, both shocked the nation and split it into two camps. One believed Hill was lying, the other believed that the man who ultimately took his place on the Supreme Court had committed perjury. In this brilliant, often shocking book, Jane Mayer and Jill Abramson, two of the nation’s top investigative journalists examine all aspects of this controversial case. They interview witnesses that the Judiciary Committee chose not to call, and present documents never before made public. They detail the personal and professional pasts of both Clarence Thomas and Anita Hill and lay bare a campaign of lobbying, public relations, and character assassination fueled by conservative power at its most desperate. A gripping high-stakes drama, Strange Justice is not only a definitive account of the Clarence Thomas nomination hearings, but is also a classic casebook of how the Washington game is played by those for whom winning is everything.