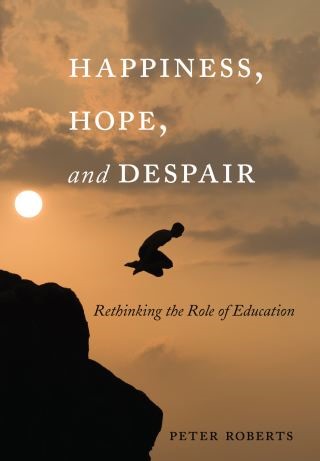 Rethinking the Role of Education

In the Western world it is usually taken as given that we all want happiness, and our educational arrangements tacitly acknowledge this. Happiness, Hope, and Despair argues, however, that education has an important role to play in deepening our understanding of suffering and despair as well as happiness and joy. Education can be uncomfortable, unpredictable, and unsettling; it can lead to greater uncertainty and unhappiness. Drawing on the work of Søren Kierkegaard, Miguel de Unamuno, Fyodor Dostoevsky, Simone Weil, Paulo Freire, and others, Peter Roberts shows why these features of educational life need not be feared; to the contrary, they can be seen as a source of hope and human fulfilment.
After years of negotiating an education system dominated by the language of competition, performance, and economic advancement, students and teachers often long for something different; they seek not just measurable success but also opportunities to ask searching questions of themselves and the world they encounter. Happiness, Hope, and Despair makes an important contribution toward meeting this need. It fosters a rethinking of the nature, purpose, and value of education, and opens up possibilities for further scholarly and professional inquiry.

Peter Roberts: Peter Roberts is Professor of Education and Director of the Educational Theory, Policy and Practice Research Hub at the University of Canterbury in New Zealand. His most recent books include Education, Ethics and Existence: Camus and the Human Condition (with Andrew Gibbons and Richard Heraud, 2015), Better Worlds: Education, Art, and Utopia (with John Freeman-Moir, 2013), Paulo Freire in the 21 Century: Education, Dialogue, and Transformation (2010), and Neoliberalism, Higher Education and Research (with Michael Peters, 2008).