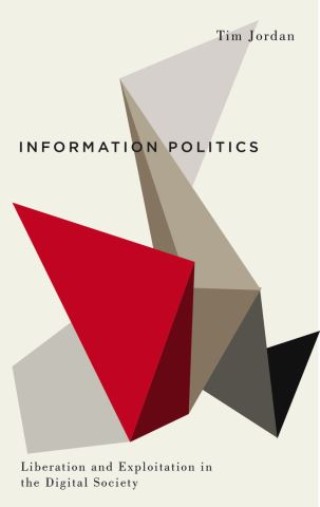 Liberation and Exploitation in the Digital Society

Conflict over information has become a central part of modern politics and culture. The sites of struggle are numerous, the actors beyond count. Currents of liberation and exploitation course through the debates about Edward Snowden and surveillance, Anonymous, search engines and social media.

In Information Politics, Tim Jordan identifies all these issues in relation to a general understanding of the nature of an information politics that emerged with the rise of mass digital cultures and the internet. He locates it within a field of power and rebellion that is populated by many interwoven social and political conflicts including gender, class and ecology.

The exploitations both facilitated by, and contested through increases in information flows; the embedding of information technologies in daily life, and the intersection of network and control protocols are all examined. Anyone hoping to get to grips with the rapidly changing terrain of digital culture and conflict should start here.

Tim Jordan is Professor and Head of School of Media, Film and Music at the University of Sussex. He is the author of Information Politics (Pluto, 2015), Internet, Culture and Society (Bloomsbury, 2014), Hacking (Polity, 2008), and Hacktivism and Cyberwars (Routledge, 2004).